Being a nerd, I’ve always loved all things space-fantasy. Growing up, my main passion was Star Wars. I loved the epic battles where heroes used lightsabers, blasters, and X-Wings. And I loved the sprinkling of incest that can only come from a tale of backwoods-planet rebellion against the established government (Star Wars did incest before Game of Thrones made it cool). As an adult, Star Wars has even prompted me to cosplay and I do a lot of charity events and just generally have fun swinging a lightsaber around and wooing ladies as a 35-year old man.

As a kid, Star Trek admittedly never gelled with me. It was always far too dry, and I was too young to truly appreciate Captain Kirk’s rampant, unchecked space-whoring or how hilarious and underrated Bones truly was. To me, the crew of the Enterprise was drier than a paper towel filled with saltines compared to a salty space rogue like Han Solo. To my young mind, listening to the Enterprise crew posit pseudo-scientific theory, and seeing the sometimes-intense dialogue exchanges between characters was like watching my math teacher and science teacher talk shop for over a half an hour. 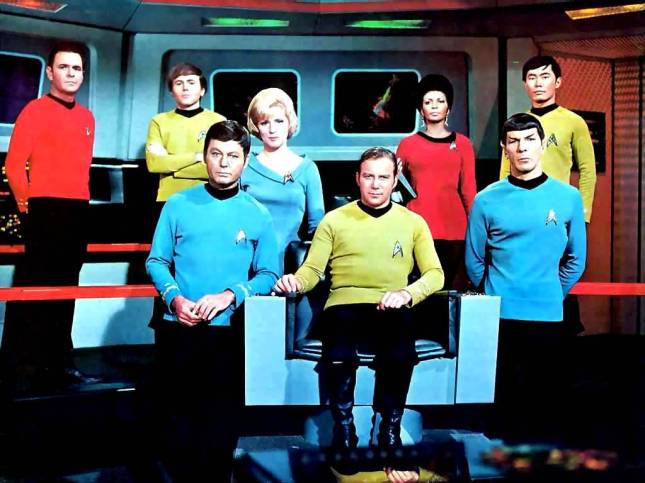 Still, though – every once in a while I would see Captain Kirk hammer-fist a lizard alien, or witness a balls-out phaser battle, or watch the Enterprise go toe-to-toe with an alien vessel. It piqued my interest enough for me to invest in Star Trek: The Next Generation when I was a little bit older, and a little bit more tolerant and accepting of full-dialogue scenes.

Next Generation is by far my favorite incarnation of Star Trek. Riker is my favorite crew member (then, and now), and Picard is a badass despite his insatiable thirst for Earl Grey tea. I had an undying crush on Deanna Troi and her wonderful space cleavage (I was a teenager, cut me some slack), and Data was just a show-stealer because who doesn’t love a badass, unintentionally sarcastic android? Despite mainly being a Star Wars fanboy throughout my life, I am thankful to have experienced the nuanced and many-layered masterpiece that was Next Generation.

Except you, Wesley. You can shut up.

As many of my friends have put it – it’s possible to love both Star Wars and Star Trek. They are cut from the same cloth, for sure, but also – they are different enough that they don’t have to compete with one another. Star Trek is more cerebral, and more involved in terms of story arcs and character development. In Star Trek, you may find yourself having to move through entire episodes where not much “action” happens in the classical sense. But you eventually become more and more invested in the characters and their lives and motivations. They become as familiar to you as co-workers or friends in real life, and with a film or series of films like Star Wars that feat is much more difficult to accomplish.

With that said, one must give credit to Star Wars as a film franchise, because the film makers behind those movies have made die-hard fans like myself attached to those characters for years. I would watch anything involving the sometimes-whiny Luke Skywalker, the noble Chewbacca, and the golden poindexter C-3PO. Despite seasons full of trials and dialogue and noble (and sometimes selfish) actions by the crew of the Enterprise, I am still just as enamored by the ragtag group of rebels flying around in the Millenium Falcon.

So, which is better? The Doomsday Machine or the Death Star? The enigmatic Q or the vengeful Darth Vader? The Tribbles or the Ewoks? Deanna Troi’s mudbath birthday suit or Princess Leia’s slave outfit? These questions are all something for the die-hard nerds within us to ponder, to discuss, to joke about – but ultimately, the discussion of which is better, Star Wars or Star Trek – is like asking which is better, rib eye steak or New York strip? Both are great (assuming you’re into both meats or sci-fi – if not, then I can’t help you) and come from the same place and are essentially consumed the same way. It’s a bit of a personal preference to enjoy one over the other, but when it comes to steaks AND sci-fi, I’ll take it all, please. I’m not going to limit myself to just one. If you want to, be my guest. More for me.