Friend Files is a feature I added to my blog, Away With Words, a while back – this being the 25th installment. Past installments appear under the “Friend Files” tag on my blog. I will be interviewing a friend of mine and showcasing why they are a friend to me and what I like about them, and also a mini-interview (five questions) that detail what they think of me. It’s a way to acknowledge my friends out there and what they’re up to and also to introduce them to my larger group of friends, acquaintances, and anyone else who might be interested in reading online.

Today, I will be talking about Amanda White. Before I get into what I think of her, here is my mini-interview with Amanda (exchanged over Facebook) where she jotted down just a few thoughts: 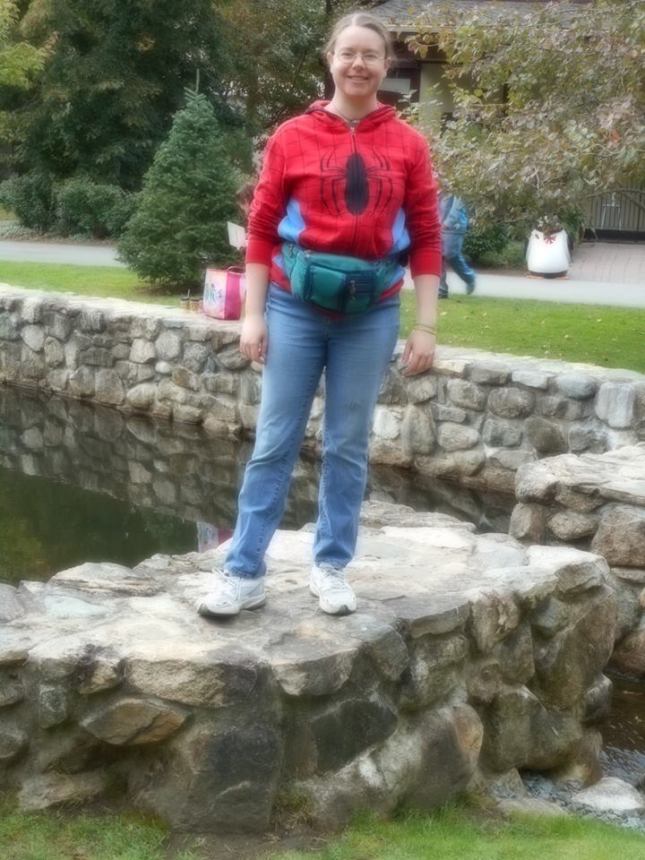 AMANDA WHITE: I was born September 10, 1982 and lived in Clinton, Maine for most of my life. My family still lives out there aside from my Mom who lives in Smithfield, Maine. My parents have been divorced for as long as I can remember. I had open heart surgery when I was not quite 3 years old to fix a common birth defect known as a ventricular septal defect aka a hole in the wall between the two lower chambers. Still have uneven ribs to this day.

I graduated Lawrence High School in Fairfield, Maine on June 1, 2001. I took a year off from school to figure out what I wanted to do with the rest of my life. I did a year at Kennebec Valley Technical College (now Kennebec Valley Community College) starting off in the medical secretary program before deciding that it wasn’t for me. So I switched to the applied arts program. I then decided to go to The University of New England in Biddeford, Maine to pursue an English degree hoping for something in journalism. Through UNE I was able to do the Salt Institute for Documentary Studies here in Portland, Maine where I completed the semester long Documentary Writing program. After Salt I decided to go back closer to home. I enrolled in The University of Maine at Augusta. That turned out to be one of the biggest headaches ever! They had no idea what to do with the credits I had already earned, kept trying to get me to start from scratch, and I ended up taking a semester worth of classes I couldn’t even use. I finally graduated in 2009 with a BA in English.

I’ve been a geek for as long as I can remember. I used to watch sci-fi cartoons and shows, I could read comics before I could read step into reading books, I had action figures instead of dolls, loved Teenage Mutant Ninja Turtles, and any cardboard box that was big enough to hold me was my TARDIS. I’d prop it up against the wall and bring my toys in. Whenever my cousin wanted to play Barbie I’d make them date my Batman and Superman action figures. You’ve never lived till you’ve tried to stuff Barbie into the Batmobile. Good thing it was a convertible. My parents also would take me to various geek shows when I was little. I got to go to a Doctor Who convention where I met Sylvester McCoy, I went to a car show where I got to me Sorrell Booke (Boss Hog), I got to meet Captain Lou Albano at a book signing, and a whole bunch of other stuff. I have pretty much the same interests today, just more expanded.

I’ve had a bunch of different jobs over the years. My first job out of high school was the Inside Out Playground in Waterville, Maine. I ended up back there after coming home from college one summer too. It’s not longer in business actually. I’ve worked in a card and gift store, a couple of convenience stores (not for very long), Wal-Mart Super Center in Augusta, Maine (one summer as a cashier and it was hell), spent a summer freelancing for The Capital Weekly in Augusta, Barnes & Noble for a few years, Target for a holiday season, AAA Northern New England, and now I work from home on my start up business as well as volunteering for the Children’s Museum and Theater of Maine here in Portland. I’ve been with them for a full year now.

I was almost married in 2009, but called the wedding off a month and a half before the date because I realized it wasn’t going to work. Then in 2013 on May the 4th Be With You, which was also Free Comic Book Day, I met the love of my life – Michael Conkright. I moved in with him this past November, along with my two fur babies (my cats) Artemis and Orion. This past May the 4th, our 3yr anniversary, he asked me to marry him. We’re currently planning a geektastic wedding bash!

AMANDA WHITE: I remember seeing you for the first time as Abraham Lincoln: Vampire Hunter at the first  Coast City Comicon. However, we didn’t formally introduce until later. I’m not sure which show, but you were definitely Obi-Wan Kenobi. It honestly may have been the same day I met my future fiancé.

AMANDA WHITE: Any time I can make you smile, blush, or both is always a good time, but let me see if I can pick one instance in particular. Oh I know! PortCon 2014 when we were talking about all of the inappropriate things you could do with a lightsaber and laughing so hard we could hardly breathe. That was some great twisted fun!

The runner-up to that would be coming up to you at the showing of Labyrinth at Cinemagic in Westbrook as you were dressed as Jareth, grabbing your hand, and saying, “I’ve been naughty! Do I get to go with you now?”

AMANDA WHITE: We share the same twisted, inappropriate sense of humor and love for things geek. That and we amuse each other.

AMANDA WHITE: Yes! Comic Geeks Unite, which Mike and I are trying to turn into a full-fledged business. Comic Geeks Unite is an online comic book forum that shares news, caters to all fandoms, provides space for people to share their own work/projects, and is a safe space for people to express their geekiness. We are primarily on Facebook with a website under construction, but can also be found on YouTube and Twitter.

Amanda is pretty spot-on about how we first met. It was definitely at Coast City Comicon during its third year (though apparently I must have met her before then, since she remembers my Abraham Lincoln cosplay). I remember meeting her in the foyer, and I believe she took my photograph and told me about her Comic Geeks Unite page. And I also do believe that her future fiancé, Michael, was there as well and I was talking to them both about Star Wars.

Since then, Amanda and I have met up at lots of local comic book conventions, cosplay events, and charity functions and she has become one of my core group of cosplay friends from my local area. And she has introduced me to Kidabaloo – which is basically a festival for kids which travels around the country- as well as other cosplay charity events. We dress up as characters from movies or as superheroes and just let the kids do their thing. It’s so fun.

Amanda is also one of the sweetest, funniest people I know (though she has the capability to cuss like a truck-driving sailor when the opportunity presents itself). She is always ready with a sarcastic/inappropriate comment, but she is also always posting thoughtful things about different issues via her social media accounts. Not only that, but she invites others to join in the dialogue with her, and even when she may disagree with someone, she still leaves it open for discussion – which is something I always admire in other people and look for in friends. Amanda also volunteers her time quite a bit – which is also something very admirable. We recently volunteered together at Kidabaloo (which I mentioned above), as well as the 92 Moose Back To School Block Party…both in Augusta, here in Maine. She usually spearheads the efforts to bring cosplayers together for the events, and coordinates what we need to do.

So, in closing – Amanda is one of those rare, giving people in my life. I am happy to count her among my friends, and with that I will leave you with some photos that showcase the sort of person Amanda is so you can see for yourself.

Amanda and her soon-to-be-husband, Mike. These two are perfect for each other.

Me as Obi-Wan Kenobi, a friend of ours as Chameleon, and Amanda as Elektra. This is what we do – this is how we met in the first place. Cosplay! 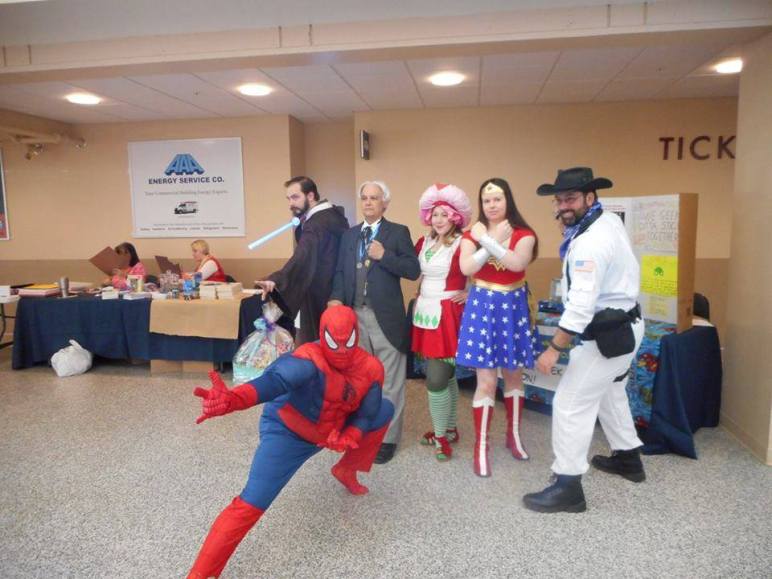 An image of all of us volunteers at an event Amanda got us into for charity. 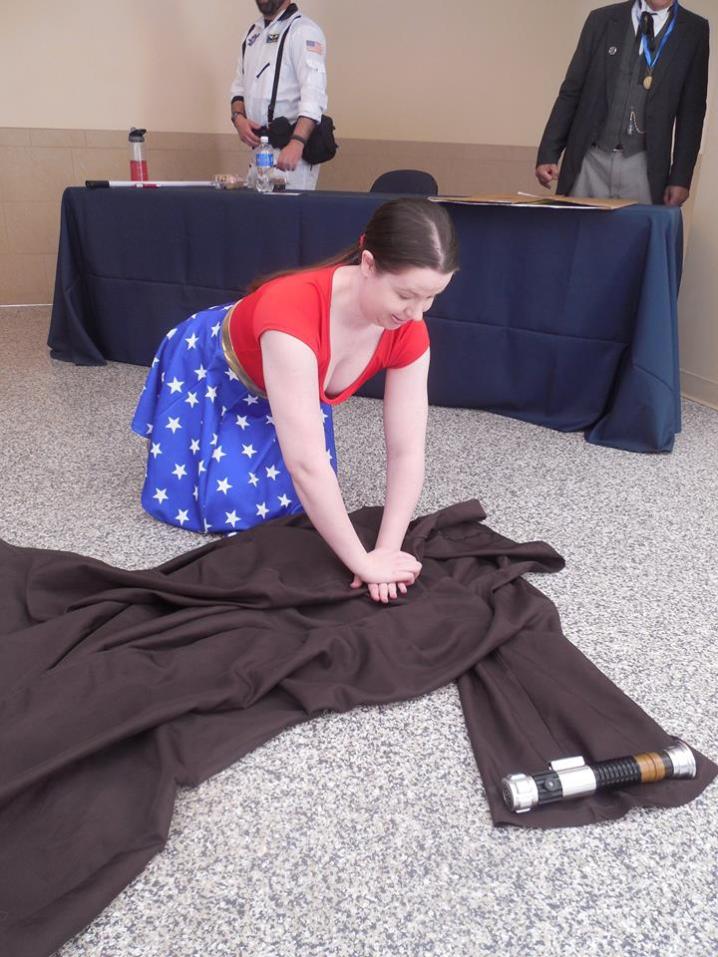 An example of Amanda’s terrific sense of humor. She wanted to give my Jedi robe CPR.

Amanda is definitely a comic geek.

The best thing about Amanda is that she’s a good friend. Here she is, dressed as the May Parker version of Spider-Woman, sitting next to our mutual friend Mike – who is cosplaying as Mario.