Cosplay Confessions is yet another monthly feature I’ve added to my blog. Every month (and maybe twice a month), I plan on featuring a different cosplayer and my interview with them, along with photos featuring their cosplays. This will not only be beneficial to the cosplayers themselves – because any publicity is good publicity when it comes to updating your fans on which conventions you’ll be at, and what you’re working on – but it will also be beneficial to those who are interested in cosplay as a hobby in general.

I have asked some cosplayers I know to fill out my questions and it’s my great pleasure to introduce a good friend of mine who is a local Maine cosplayer, Linsey Albrecht. I first met her at Coast City Comicon 2012, where she was cosplaying as Boba Fett (or Booba Fettish), and since then we’ve become friends and occasional convention buddies – and you can see the Friend Files interview I did with her HERE. Linsey is still in the early stages of her cosplay career, and I can’t wait to see what else she comes up with in the future.

On to the interview!

Hi, my name is Linsey. I’ve always enjoyed dressing in costume and making costumes, but that was never much outside of Halloween or (admittedly) for my own entertainment, so I count myself as having started cosplaying when I attended my first convention, the Coast City Comic Con, in 2012. Since then, I’ve been attending cons and other events as a lady Boba Fett and recently I came to the Portland Comic Expo as Pyramid Head, from the video game and movie Silent Hill. Pyramid Head was a dramatic difference in fan base and character choice from Boba Fett, but I’ve been wanting to be Pyramid Head since I first saw the making of the Silent Hill movie. The detail put into the costumes was incredible (they used very minimal computer effects) and I was surprised to find they used professional dancers to play the parts of the monsters. Because of that, I decided that if they could make Pyramid Head out of raw materials, that someday I would, too.

I try to go to conventions as often as I can, because I love seeing people get excited about the cosplayers, the vendors, and especially the guests at these events. It’s amazing to have the opportunities to meet the creators and actors behind our favorite comic books, games, and shows. One of my favorite conventions that I have attended so far has been the Coast City Comicon, because for two years in a row they had Kevin Murphy and Bill Corbett, the men who voiced the robots Tom Servo and Crow T Robot on Mystery Science Theater: 3000, and I had a lot of fun with them. At the costume contest, I was cosplaying as Boba Fett, and Bill Corbett was one of the judges. He rolled his eyes when I approached and made a comment about how he didn’t like Star Wars, so, without saying a word, I casually pointed my blaster and shot him in the head. He played along and fell back in his chair, pretending to have been shot between the eyes, and I walked off. My other favorite has been The Bangor Comicon, which featured some fairly big names as guests, such as Billy Dee Williams (Lando Calrissian from Star Wars), the original cast of The Power Rangers, Gigi Edgley (Chiana from Farscape), and creature actor Doug Jones. At some point I would love to venture into new territory and check out the Boston Comicon. 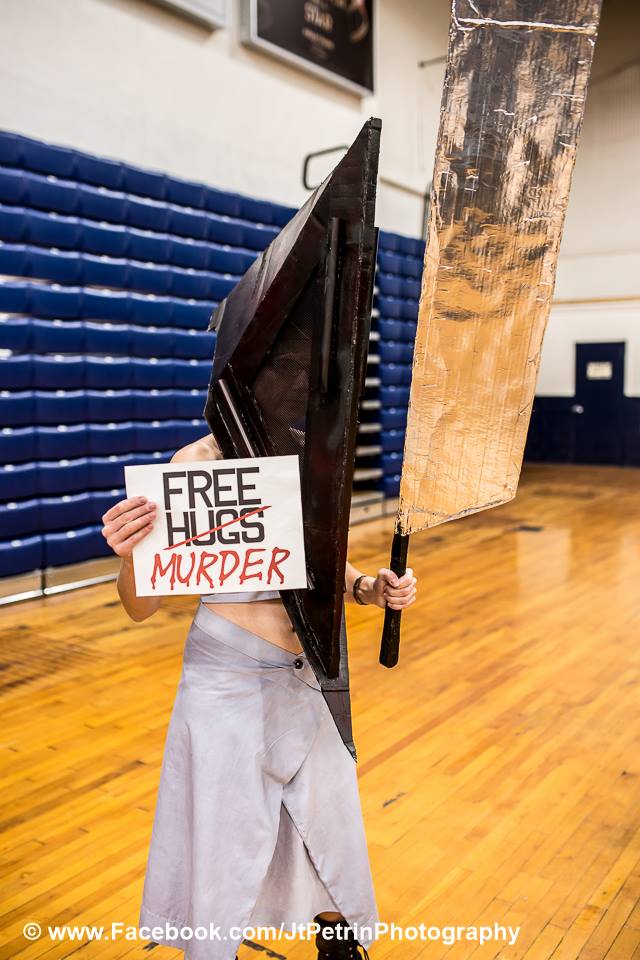 Yeah, I suppose when someone just wears something for the sex appeal, even if it doesn’t really look like the character. I don’t mind if the actual character looks sexy and their costume is sexy because of it, but, let’s say, Princess Peach, for some reason, is now wearing a bikini and tu-tu. I can’t get into it…I mean, I could physically GET INTO it (and boy wouldn’t you know it would be hot as hell), I just mean it’s not my thing. I understand people who do that aren’t doing it to make me happy, but cosplay is something different for those people than it is for me. When I see a character that I like, I say “I want to be THAT for a day.” I am thrilled when I can see the love and energy that went into making a costume, when someone is passionate enough that they want to embody all the aspects of that character and really bring them to life. 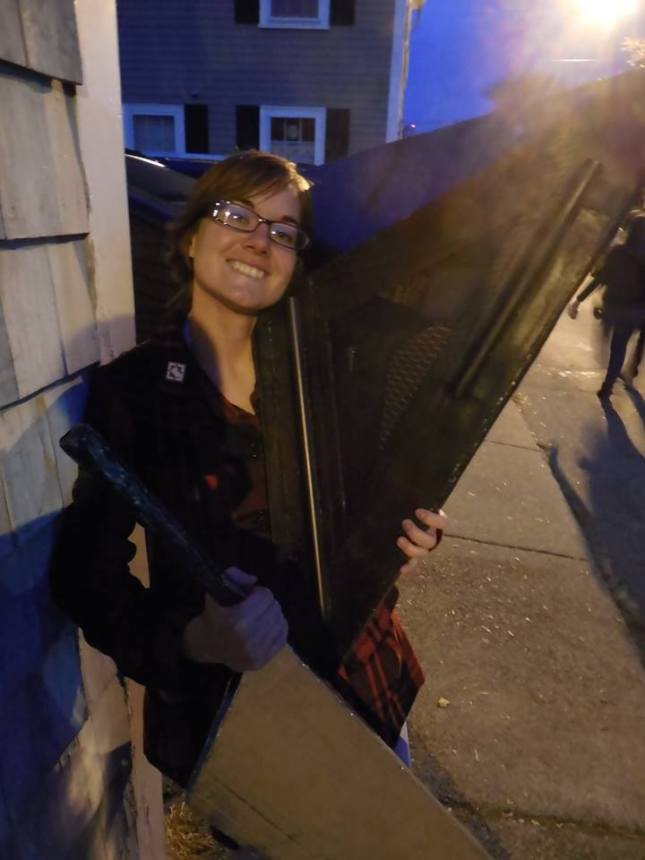 I’ve always wanted to be a classic Batman: The Animated Series Harley Quinn. I’m talking top-to-bottom jester outfit, black eye mask, make-up, mallet, maybe even some hyenas. I’d also like to try my hand at becoming Chiana from Farscape. I sort of told Gigi Edgley, the actress who played her, that I’d do it, so, now I kind of have to, haha.

Joe Carro, of course! And I’m not just pandering. He is so committed and very passionate about Star Wars. I think to some degree Joe sort of sees himself as a representative of cosplayers. He’s often chosen for interviews from news channels who are doing stories on a con, and once ended up as a guest on someone’s podcast while at a con. He’s very professional about what he does and I can see he really enjoys when children are amazed to even be in his presence. It’s like being Santa Claus, and in that position you have to maintain some sort of respectable demeanor, because you’re an influence. I think he realizes that.

Everyone’s different. Everyone has their own reason for being there. Some people are more devoted to a single character because they treat it like a job by attending charities and other events to help bring in money. Some people do it because it promotes their profession or craft. I just do it because I really love seeing people’s eyes light up and to hear them talk about how happy it made them to see my character. I like being me, but it’s also nice being someone else for a day, heh. 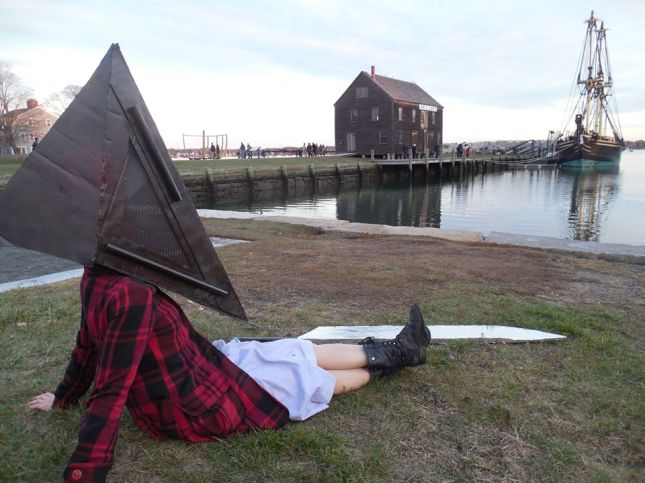 Yes. Tutorials aren’t always accurate, but sometimes they’re the only thing you have to guide you on making a costume, so it’ll be a lot of trial and error. Also you’d be surprised at what you’re capable of making, even if you’ve never made something before. I had to make everything when I cosplayed as Pyramid Head; which included a skirt and top along with the helmet. I had never sewed anything before, nor spray painted anything. I had no idea what I was doing, and it took a few times, but in the end, I realized that mistakes can be fixed, especially if you have extra materials. So, don’t think you’re incapabe—try it, and then find out if you’re incapable, hahaha.

Linsey cosplaying as Pat Benatar next to Joseph Carro Cosplay who is dressed as Jareth from the movie Labyrinth.

I have my Facebook set to private, sorry! But if you add me, you can see my pics!