When most people think of Salem, Massachusetts – they undoubtedly think of witches. It’s something that has defined that town since the Salem witch trials back in the 1690’s. Much like people coming to Maine to experience lobster or Stephen King (seriously, people just go right to his house in Bangor and hang out in front of it), thousands of people flock to Salem every October in the hopes of going on spooky ghost hunts or buying a haunted tarot deck or doing one of the many, many touristy activities one can find in Salem.

For my own part, I’ve been going to Salem almost every year since 2007. When I first started going to Salem, I was with my (now) ex-wife (though we didn’t marry until 2008) and we went on a whim. It was fun, and we had a blast. We were married the following October in 2008 and ended up going to Virginia instead of Salem that year, for our honeymoon. But we re-visited Salem again in 2009 with some friends and I’ve been going back ever since. 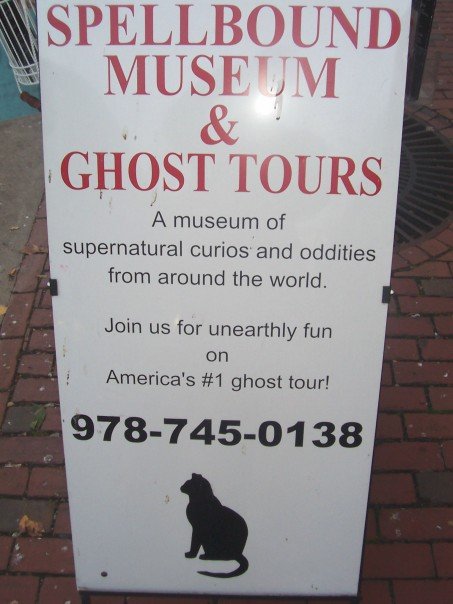 Back in 2007 I went on a ghost tour with Spellbound Tours. 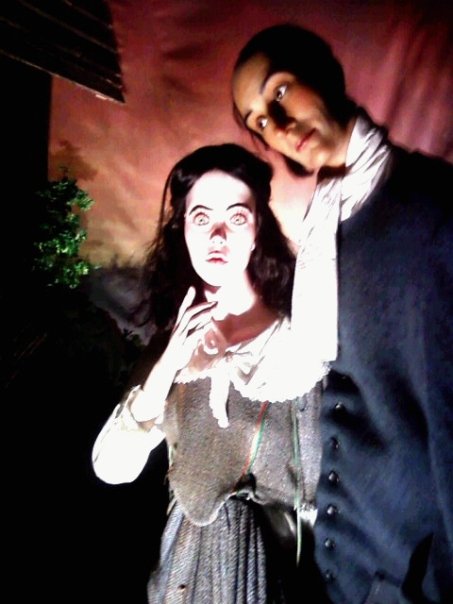 In Salem, there are lots of creepy museums with wax figures like these. This is from my first visit in 2007.

For the uninitiated, Salem is a very energetic town situated in a bay. It has a fairly simple layout, with only a few main streets (one of the most important being Essex Street on Halloween), so navigation is pretty easy once you find a parking spot. Speaking of which – it’s super-hard to find a parking spot unless you can make it to Salem very early in the morning. When I went back in 2012, we only just managed to nab a spot and we got there at around 7am. Most of the time, I don’t get there until later on, and I usually have to resort to parking on the outskirts of Salem or in nearby Peabody, Mass. Once you do manage to find some parking, the day in Salem is yours.

THINGS TO DO IN SALEM

Like I said above – Salem is an energetic town. There is always something to do. Essex Street is where most of the action happens. Huge crowds roam the main thoroughfare, trenched in the middle of numerous shops and eateries and museums. Many people are dressed in elaborate (or sometimes simple) costumes, expressing their love for the Halloween culture we find ourselves in. Most are quick to offer photo opportunities with you, and some are even professionals who busk for charity or extra money on the street. On top of the costumed delights one can find (and don’t be shy about dressing up – it’s just what they do there), there are also very talented folks who perform on the streets. Juggling, dancing, playing music on guitars or banjos or buckets, acting, singing, etc. You never know what you’ll find. Oh, and watch out for the evangelical preachers shouting on megaphones that you’re going to be burning in hell.

If you’re looking for museums, Salem has you covered. There are actual, honest-to-goodness museums dedicated to art – such as the Essex-Peabody Museum. There are museums dedicated to the infamous history of Salem regarding the witch trials of the 1690’s. There are wax museums. There are museums even dedicated to horror film history and pirate history. And one of my favorites – the House Of Seven Gables, which Hawthorne wrote about during his time as an author. (I wrote somewhat about my obsession with Nathaniel Hawthorne in some of my other posts you can find HERE and HERE)

If the crowd is too much for you – you can take a break and head over to the ship docked in the bay and relax with some fresh air by the water. And you can take a trip to an old-fashioned candy shop on Derby Street called Ye Olde Pepper Candy Companie and pick up some delicious old-fashioned fudge. And if it’s more savory food you’re after, there are plenty of good places to eat in the area. Flying Saucer Pizza has some of the best pizza I’ve had, and they are very sci-fi themed (and even have a statue of Captain Picard in their foyer). And at the Polonus Polish Deli, you can find the best pierogis and kielbasa around. There are too many good food options to list.

Aside from all that, there are a ton of haunted houses (especially the touristy kind you have to pay to get into), ghost tours (like I mentioned above), curiosity shops, and bars if you’re into the night life. There’s a movie theater right in the middle of Salem if you want to catch a flick and get away from the Halloween stuff. And there are comic book stores and video game stores in the area, too, if you need a nerd-fix. There are usually at least a couple of carnival areas complete with food trucks and amusement park rides, too, if you need somewhere to bring the kiddies. Also – be sure to check out the house from Hocus Pocus, as well as the statue in honor of the show Bewitched in the middle of town. And if you’re a cosplayer like me, Salem is a good option for testing out new cosplay ideas and just generally getting the convention experience outside of an actual convention. 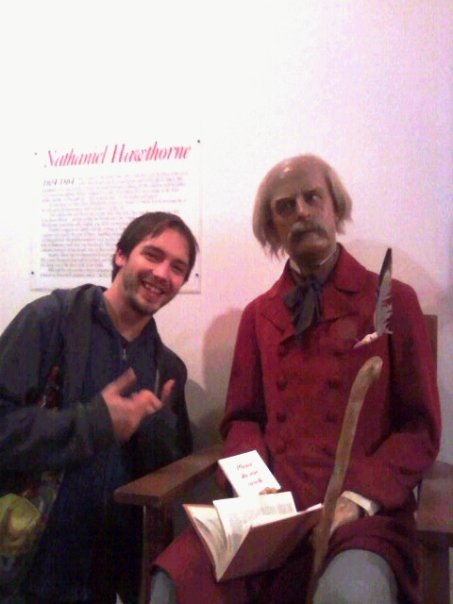 In 2009 – when I first met Nathaniel Hawthorne…or, at least a wax facsimile of the man. 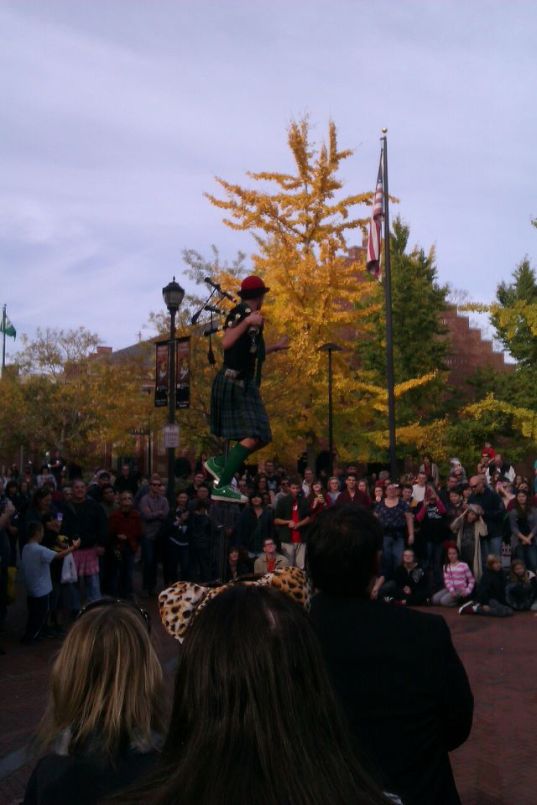 A street performer in Salem. This guy was charming and really had the crowd going. 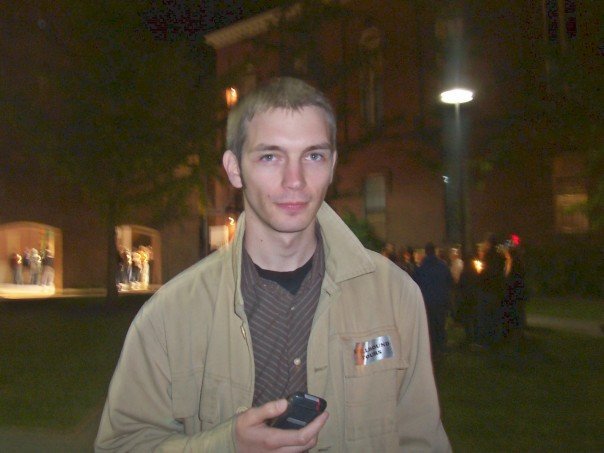 Me on a ghost-hunting tour back in 2009 in Salem 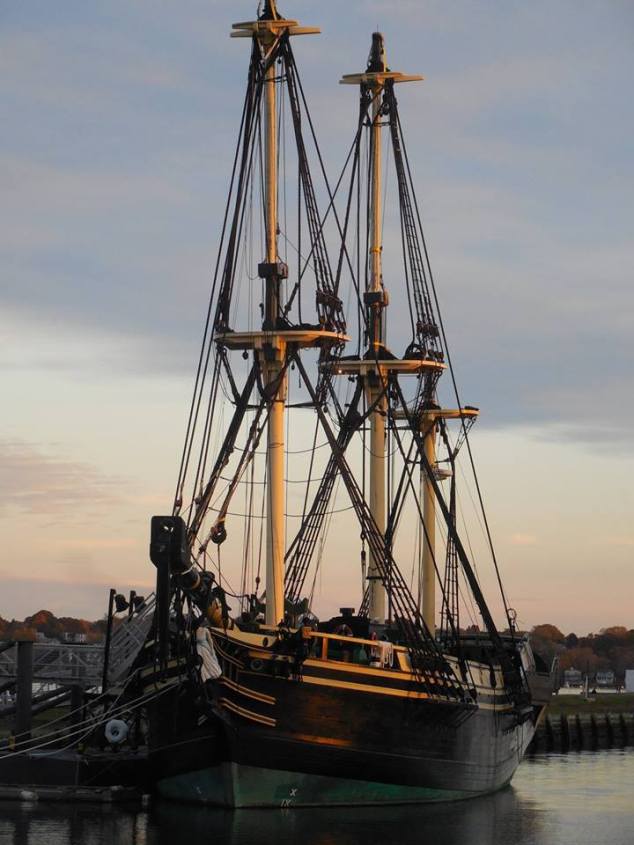 A ship in the calm Salem waters. Good for photo ops and relaxing near to escape the commotion. 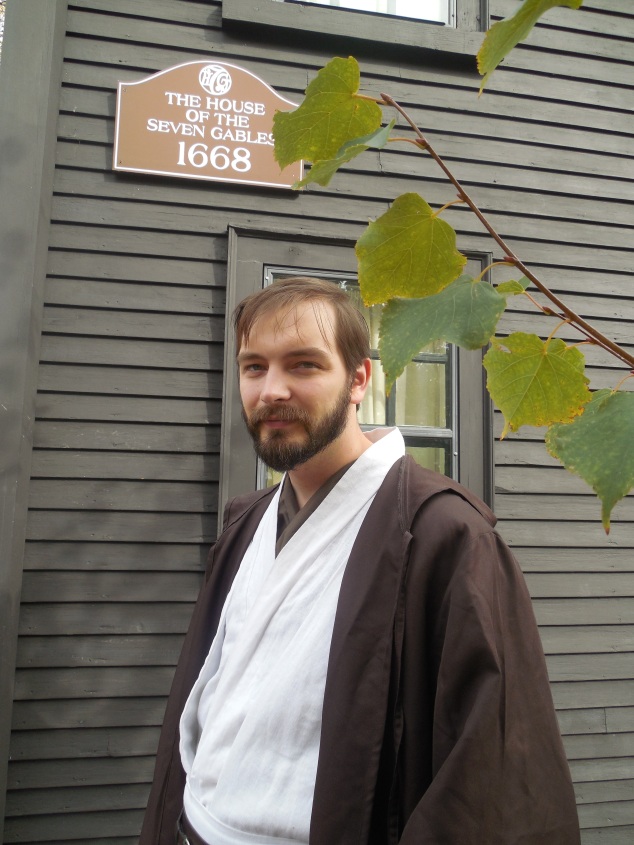 Me (as Obi-Wan Kenobi from Star Wars: Episode III) in front of the House Of Seven Gables, made famous by Nathaniel Hawthorne. 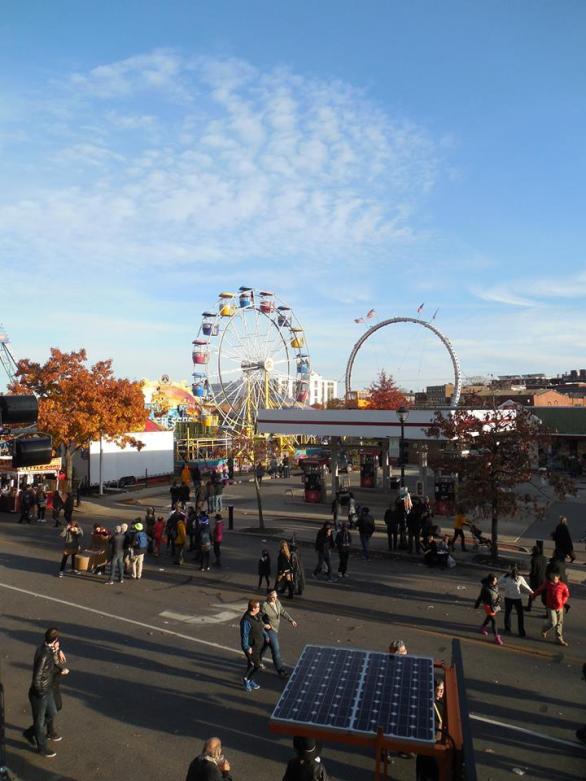 A ferris wheel at one of the carnivals set up in Salem. There are at least a couple usually going on. 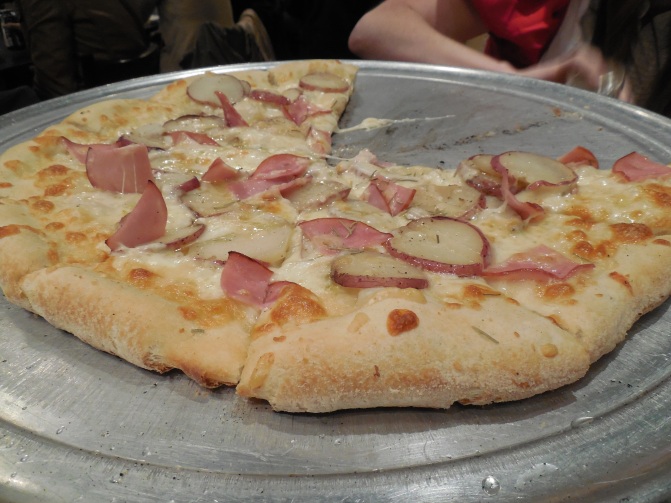 A delicious pizza from Flying Saucer Pizza in Salem. This one was called “The Picard”, I believe. 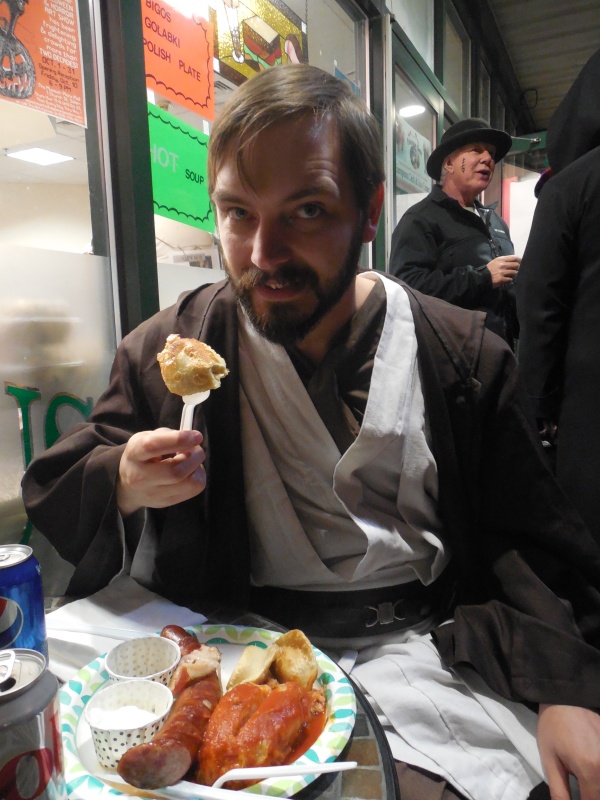 Me eating some kielbasa and pierogis at Polonus in Salem.

WHY I KEEP COMING BACK TO SALEM

For me, my favorite holiday ever is Halloween. If you’ve ever seen any of my other posts, you know that I love to cosplay and I love conventions. Salem on Halloween is essentially like a convention you don’t have to pay to get into. It’s sort of like a cosplay Mardi-Gras. It’s also very peaceful, very positive, and almost entirely family-friendly. Recently, this past Halloween (2015), there were 100,000 people estimated to have been in Salem – with only five arrests. How great is that? Sure, there are problems such as parking…and don’t even get me started on the bathrooms….but overall, Salem in October (and especially the weekend on or before Halloween) is the best Halloween you’re likely to experience in America. So if you’re thinking of something to do next year on Halloween – start making your reservations now!

I’ve had so much fun in Salem, and have made so many friends – I will be trying to visit again every year. Hope to see you there. With that, here are a few bonus photos from Salem over the years. 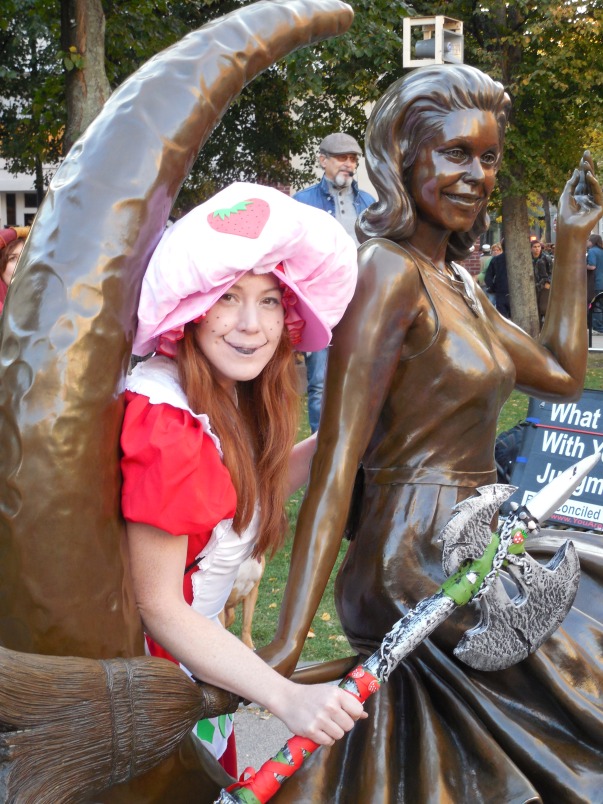 My girlfriend Dorothy as Evil Strawberry Shortcake at the Bewitched statue in Salem. 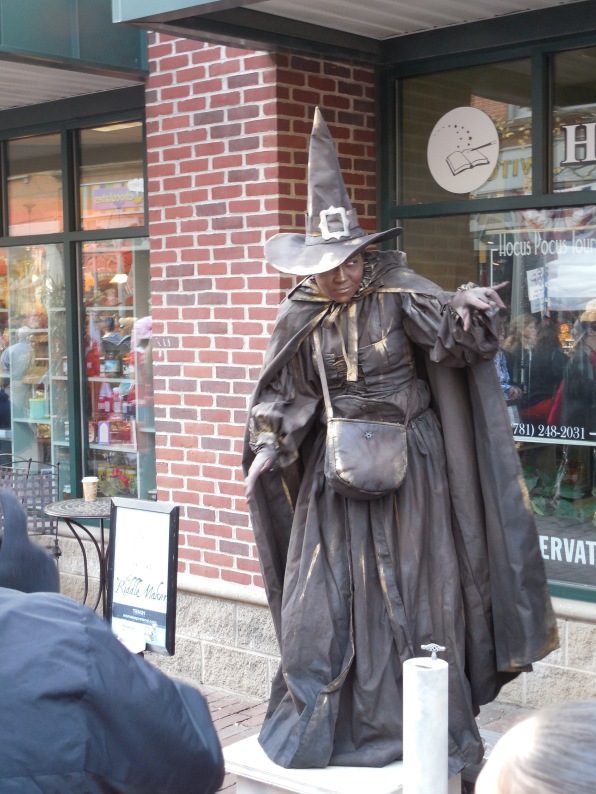 A busking witch in Salem 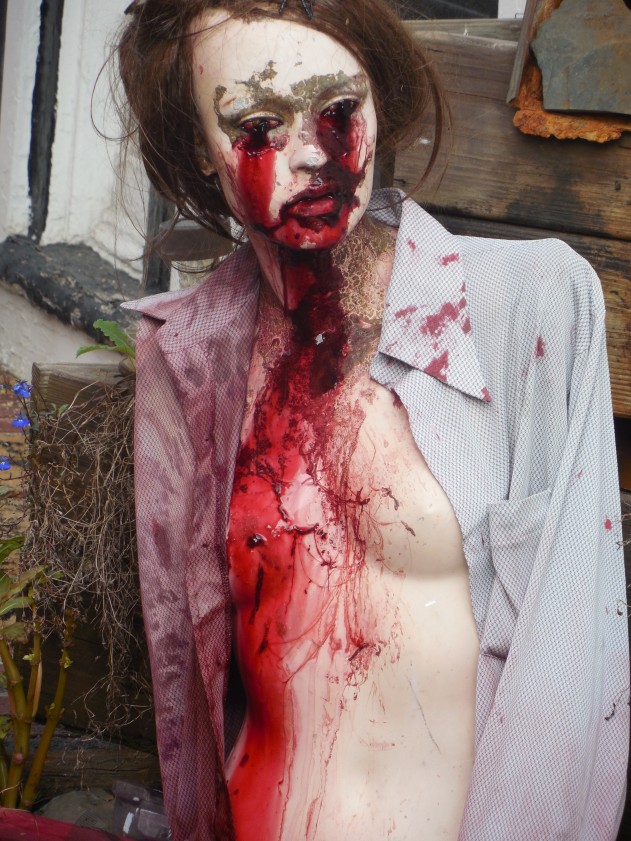 A creepy setup in someone’s yard. 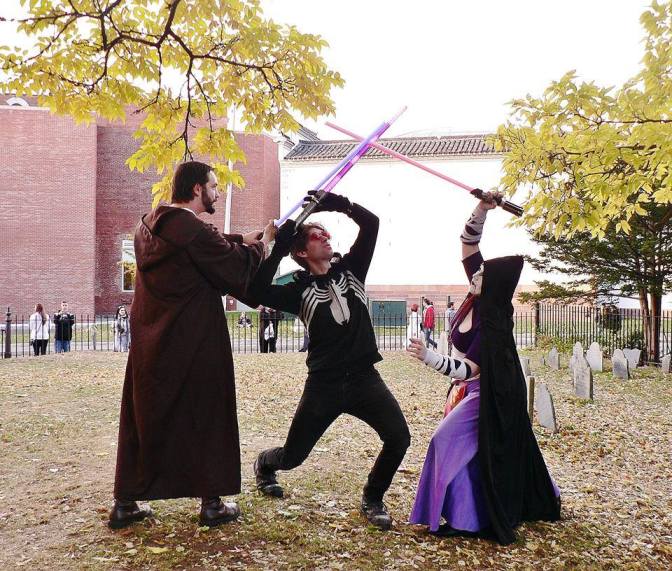 Me (as Obi-Wan Kenobi), my friend Dylan (as Venom), and my girlfriend Dorothy (as Asajj Ventress) all posing for a photo in Salem. It was Dylan’s first time there on Halloween. 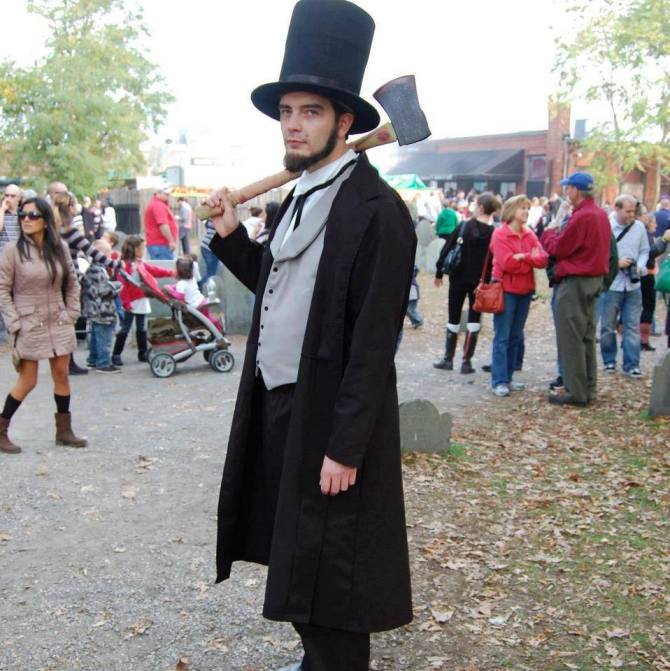 Me as Abraham Lincoln: Vampire Hunter, in a graveyard in Salem 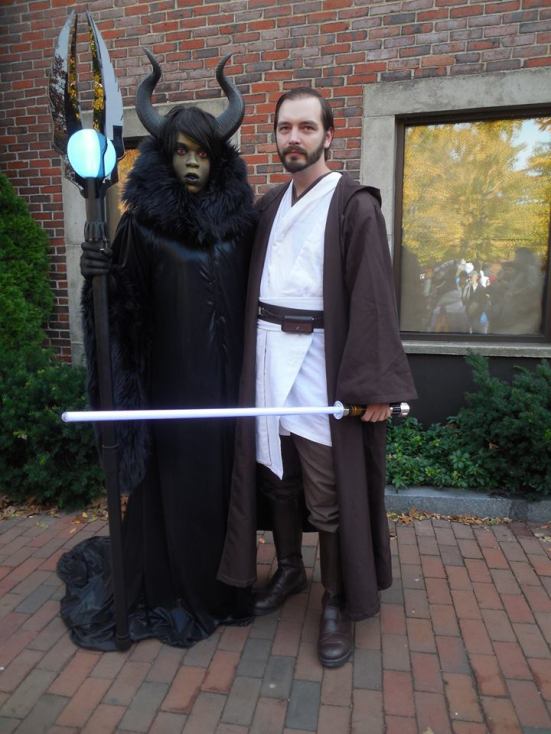 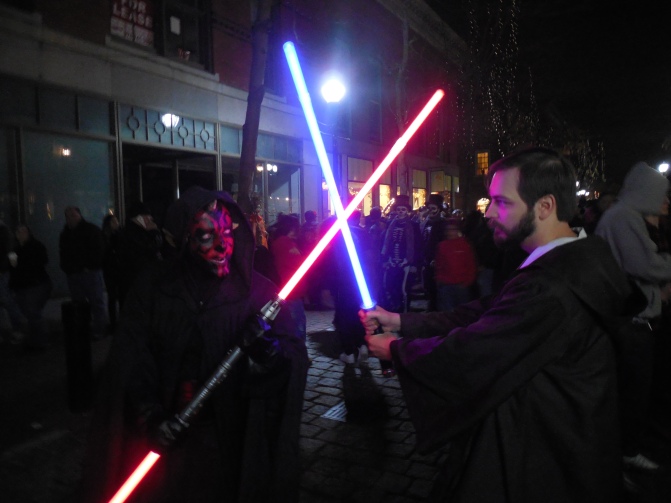 Me with my friend Marcelo (as Darth Maul), whom I met on the streets of Salem before we became friends.