So, in the same vein as my new blog feature “Friend Files” – I present to you the interview I had with local Maine writer and filmmaker, Shawn French. I met Shawn at a few local comic book conventions where he was promoting his comic book, Escape From Jesus Island. Shawn is an extremely busy guy (as you’ll soon find out) so it was super-nice of him to take time out of his busy schedule to answer these questions for me. Thank you, Shawn! Past installments of Eight Simple Questions can be found under the Eight Simple Questions tag on my main blog page.

Note: These are “beginner” questions for folks who are either interested in Shawn’s work, interested in possibly getting into writing or drawing comics, curious about the methods comic book writers/artists use, or if you’re just curious in general. These are very simple questions, meant to just get a snapshot of what the comic business is like for these particular creators. Tune in to later editions of this blog feature for more interviews with other comic book creators.

I’m a writer and filmmaker who owns Wisdumb Productions in Maine. Back in 2009, I wrote and directed a slasher flick called The Wrong House and now all my waking hours go into our horror comic book series, Escape From Jesus Island, about a botched attempt to clone Jesus that unleashes the Antichrist and sets into motion the End Times.

In addition to the comic itself, we’re working on a spinoff web comic called Mutant Babies (illustrated by Peeter Parkker), a line of gaming miniatures from sculptor Nicolas Genovese, a board game designed by our editor Shawn Greenleaf and I’m co-designing an Escape From Jesus Island video game with veteran designer Eric Pavone (Army of Two, Spider-Man, Deus Ex: Human Revolution). I am a whole lot of busy and even more tired.

The opportunity to work with an artist like Mortimer Glum is not something a sane writer passes up. I’ve been obsessed with this Jesus-cloning monster story since I first wrote it as a short film script in 1993. I’ve spent my entire adult life working on this and searching for the right medium to bring it to life.

While making The Wrong House, I met Mortimer through The Shoggoth Assembly, the group that handled all the special effects on the movie. At that point, I was trying to find a way to shrink this story down enough to be able to shoot it on an independent budget. Morty and I got talking about how well it would translate into a comic book series and it’s been full-speed ahead ever since.

I grew up reading comics, but this is my first foray into writing them. Morty has been immeasurably helpful in getting me past my wide array of rookie mistakes.

Getting on shelves is the biggest challenge to putting out a comic ourselves. At the end of the day, a lot of comic book shops don’t want to carry a series unless they can order it through the Diamond catalog. While we’ll be releasing our trade paperback of Episodes 1-4 through Diamond early next year, the numbers just don’t work for us to list single issues with them. What that means is I spend a whole lot of time reaching out to stores and filling orders one by one. It’s a giant time-sink.

One workaround we’ve managed is through variant cover deals. For our first two issues, the Phantom Group (a collective of stores in the US, UK and Canada) ordered a few thousand copies of each issue with a cover only they have. For Episode 3, we worked out a similar deal with Geeky Kid Comics in the UK.

These sort of deals provide some of the benefits of having a publisher, without any of the negative aspects. We get a partner to help shoulder some of the upfront printing costs and we don’t surrender any creative control.

I think it’s the great equalizer. Storytellers are no longer limited to tales that receive pre-approval from the industry’s gatekeepers. No major publisher would have ever touched our comic before it was released, so we just pitched it directly to comic book readers as a Kickstarter campaign and they got behind us in a big way. The concept was just too nuts for a big publisher to gamble on it right out of the gate, but Mortimer and I knew we had something special here. If we could just get this onto the page, people would love this story like we do.

At some point, we’d love to sign with one of the Big Five, but we knew we had to establish this franchise first and get our feet firmly beneath us.

Growing up, it was Stephen King. My mother was a big King fan, so his books were always around the house and I read most of them at a younger age than I probably should have. He’s largely responsible for my early obsession with horror.

As a writer, I idolize Joss Whedon. The fact that he’s so fearless about killing off beloved characters adds another layer of excitement to his stories. He originally wanted to kill off Kaylee in the Serenity movie. Kaylee! That is madness. No one is safe and that’s a sensibility I bring into every story I write.

The big struggle of self-distribution is just finding enough hours in the day. Between working a full-time day job, writing the comic and web comic scripts, doing promotion and distribution work, live signing events, researching merchandise options and designing mechanics for the video game, I have absolutely no life outside of this project. I haven’t seen a movie in a theater in years. I rarely leave the house on weekends, unless it’s to go to a convention. Even having thrown everything else in my life overboard, it’s a constant struggle to keep afloat. The workload is relentless, but we knew that coming in.

I try to embrace the grind and just keep powering forward. I’ve been chasing this story my entire life. Every time a new page rolls in, I get another adrenaline rush that helps recharge the batteries.

Mortimer Glum’s artwork is ridiculously gorgeous and that opens a whole lot of doors for us. As an independent, it can be tough to find ways to make your work stand out from the crowd. We decided from Day One to not approach this as a comic book series. It’s a multimedia franchise. Comics, web comics, merchandise, games and eventually a film version.

I think our view of this as a bigger project encourages our fans see it that way too, and that helps distinguish us a bit from the rest of the indie pack.

I’ve never met a comic book creator who was happy they signed with a small publisher. I’m sure those people exist, but I’ve yet to run across one. What I hear over and over are stories about creators getting fucked over and lied to. At the end of the day, no one cares about your creation more than you do, so I’m big on DIY publishing until you’ve carved out enough of a name for yourself to sign with someone legit.

Never before in history has there been so vast an array of tools available to poor people who have no connections. Crowdfunding is an incredible opportunity and our comic wouldn’t exist without it. Social media allows for a tremendous amount of free advertising. And distribution platforms like ComiXology and Amazon allow you to make your product available to anyone who wants it.

It comes down to hustle. If making comics is your dream and you’re willing to put in the hours, there’s nothing but a mountain of work stopping you from success. So get to it!

If you enjoyed this mini-interview and would like to know more about Escape From Jesus Island (which even Clive Barker gave a great blurb for!) then please check out the OFFICIAL WEBSITE. Additionally, check out the FACEBOOK PAGE – and if you’re on Twitter, subscribe to the Jesus Island Twitter account HERE. And make sure you also check out the ONLINE STORE. 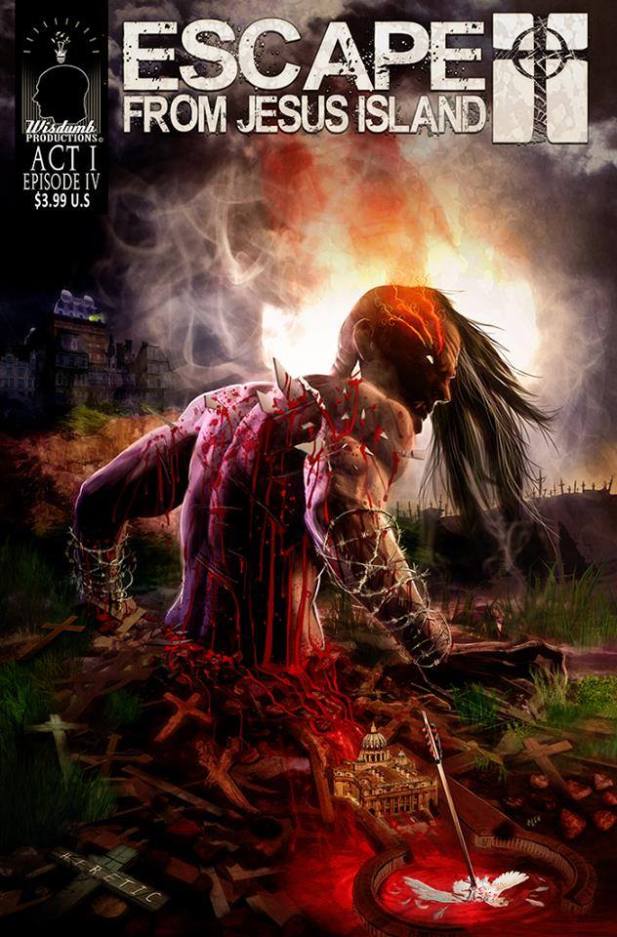 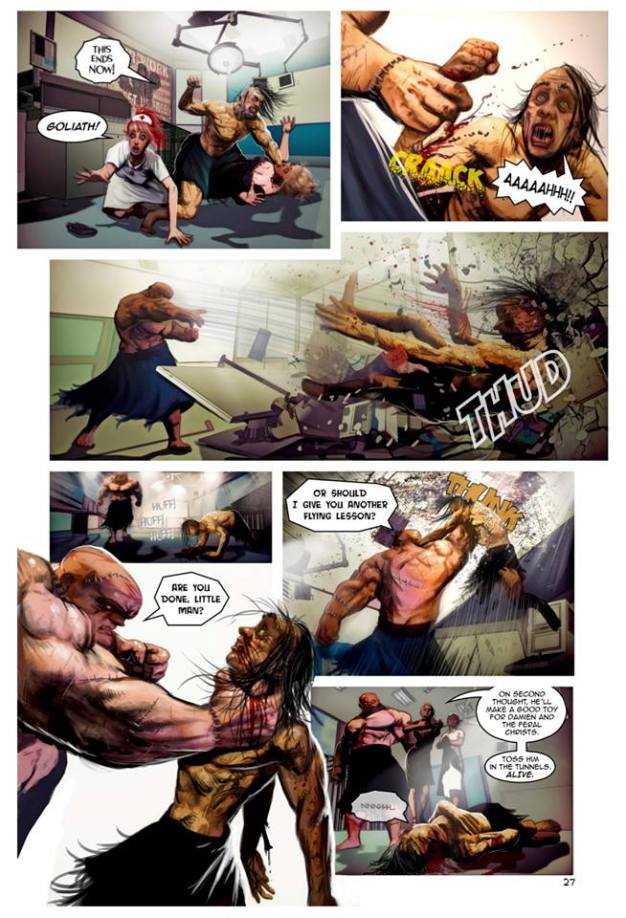