Friend Files is a feature I added to my blog, Away With Words, a while back – this being the 21st installment. Past installments appear under the “Friend Files” tag on my blog. I will be interviewing a friend of mine and showcasing why they are a friend to me and what I like about them, and also a mini-interview (five questions) that detail what they think of me. It’s a way to acknowledge my friends out there and what they’re up to and also introduce them to my larger group of friends, acquaintances, and anyone else who might be interested in reading.

Today, I will be talking about Ramon Anderson – Martinez. Before I get into what I think of him, here is my mini-interview with Ramon (exchanged over Facebook) where he jotted down just a few thoughts:

RAMON ANDERSON – MARTINEZ: I’m currently living in Portland, Maine with my husband (best husband ever) and my dog (best dog ever).  However, I’ve only lived in Maine for three years now – I grew up in Wisconsin.   Right now, I’m working at a bed and breakfast in town, making ends meet while taking classes towards a hopeful future Master’s degree in Public Policy.

As far as hobbies and interests go, I guess primarily, I enjoy chasing my dog in circles around the apartment until one of us passes out.   Really though, I love art history.  Going to art museums, reading up on my favorite artists and periods.   Personal favorites of mine are Frida Kahlo and Mark Rothko.  I also enjoy the hell out of comic books.  I am primarily an intractable Marvel fanboy, but my favorite story of all time is Promethea, by Alan Moore.

I also enjoy video games, board games, and tabletop games, pottery, photography, and being outdoors – hiking and camping and rolling in the dirt.

RAMON ANDERSON – MARTINEZ: We met when I was hired at Saco Starbucks.   I remember seeing your impressive bearded visage across the bar on the day that I came in to interview with Jill (our boss).  I remember thinking “oh man, people here are all cool and interesting and probably tight-knit. I’m gonna’ be super awkward.”

And then I was.

To your credit though, you either didn’t notice or didn’t care, because you were legitimately the first friend I made in Maine – you were always friendly and helpful and had some terribly uncomfortable joke or story to tell that made the entire experience much more….rich.

RAMON ANDERSON – MARTINEZ: Our entire time working together was a good memory!  The dad jokes, the David Bowie Halloween, the time you drew portraits of all of us, the week long “chin-boy” harassment episode… the list goes on.   What stands out to me is that you were always fun to work with and always a good and engaging friend.  That’s a pretty rare thing.

Because I can be pretty prickly and antisocial, and you have a cool way of making that not matter.

What can I say?  Why does anyone stay friends?  We get along, we have common interests, we have a good laugh, and I’M NOT DONE WITH YOU, JOE CARRO.

RAMON ANDERSON – MARTINEZ: I humbly donate this plug to a charitable organization of your choosing.  I’m not a plugger, and I’m honestly not really doing anything plug-worthy right now.  Haha.

Ramon is a strange and wonderful human. When I first met him, I was angry that someone taller than me had entered the world of our little store in Saco. (Not really, I just love to be dramatic) But eventually, I found common ground with Ramon. We both liked video games. He was super-into Pokemon and Everquest and Final Fantasy. We were both into some nerdy fandoms – he was into Star Trek while I was into Star Wars. The thing that really drew me to Ramon, though, was his honesty. If Ramon disagrees with you on something – he will stay silent for a while, sort of viewing you as he lowers his head and narrows his eyes. If he thinks something you say is funny, he throws his head back and guffaws. If he has something to interject, he will do so in an intelligent way that isn’t cumbersome and is very understandable and concise.

Honesty, as I’ve said before in these Friend Files interviews – is a quality which I admire in other people. I always know where I stand with Ramon. We disagree here and there on different things, because we are human beings and we’ve had different experiences and upbringings. But we always connect on other things, which is why we are still friends.

There are many work-related memories I have with Ramon. Outside of work, we haven’t really hung out all that much – but we are both internet people, and I interact with Ramon on a daily basis more so than even some of my current co-workers. He’s always sharing some sort of interesting meme or news about comic books. He recommended me to my now-favorite fried chicken place called Figgy’s (seriously, it’s good – you need to check it out if you’re in the West End here in Portland, Maine) and one time he knew how much I loved Elder Scrolls, so he gave me access to his Elder Scrolls: Online beta, which was super-nice of him.

I’ve seen Ramon start out just like the rest of us, as a barista – and move through the chain up until he ran his own store recently – all in a very short amount of time, which shows just how smart and dedicated this guy is. And now, he is pursuing other, more meaningful things – which I also greatly admire, and I know he’ll go on to do great things. He is someone I can trust, and is someone I’m glad to call a friend. He’s got a really cool dog, and his husband Richard is a really cool guy as well. Ramon’s a good guy and deserves all this coolness in his life.

And now, I will leave you with some photos that showcase my friendship with Ramon as well as his character as a human being.

A picture I took of Ramon at the store we worked at together. I put the tiger from a Sumatra retail faceout on his back.

A drawing I did of Ramon for our employee wall at work. 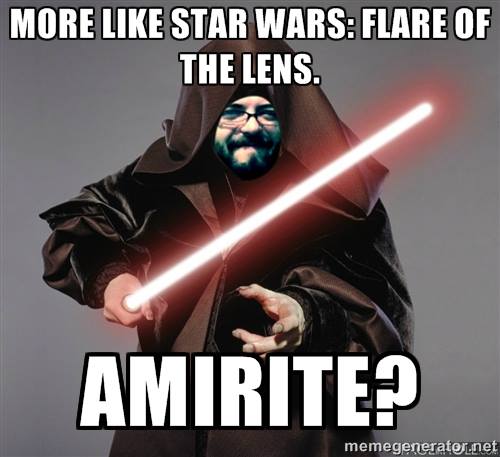 Ramon hates J.J. Abrams so I made this meme with his face in it.

Ramon and his awesome husband Richard.

Ramon and his dog, Seito.