Horror films have made leaps and bounds over the years in terms of what scares the general public and what chills the blood. Since it’s now October, I’m going to take some time and list my TOP TEN FAVORITE HORROR FILMS in honor of my favorite month. 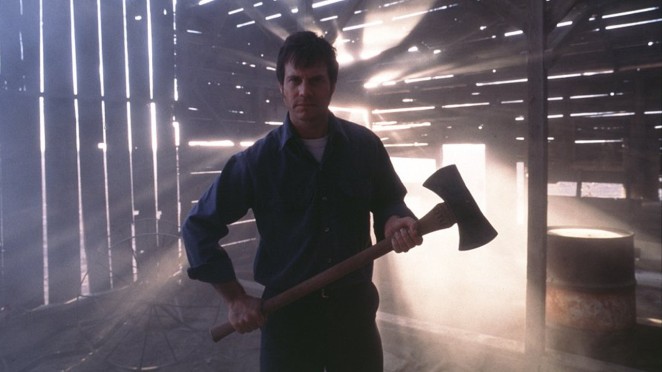 PLOT: A man confesses to an FBI agent his family’s story of how his religious fanatic father’s visions lead to a series of murders to destroy supposed “demons.”

WHY I LOVE IT: Frailty is one of those films that is severely underrated not just as a film in general – but also as a horror film. Although deemed a “thriller” – in this case, I would go so far as to say that Frailty stands more in the horror genre due to its supernatural themes and gory violence. When I first saw this, I wasn’t sure what to think – but with its religious undertones, Frailty has endured as one of my favorite films of all time and definitely as one of my top horror films of all time. The only reason it falls behind some of the others on this list is that, yes – it does contain many trappings that decide it’s only partially a horror film. Still – don’t count this one out. Give it a watch.

PLOT: A millionaire offers ten thousand dollars to five people who agree to be locked in a large, spooky, rented house overnight with he and his wife.

WHY I LOVE IT: When I first watched the 1959 version of House On Haunted Hill – I was thinking it was going to be a movie that my friend (who was watching it with me) and I would make fun of. “Oh, look at the outdated special effects,” I thought we’d be saying. Turns out, the movie was quite freaky and we had to put the lights on. Now that I’m much older, the film still retains its scare factor and I challenge anyone who is scared of ghosts and the supernatural not to get a little freaked out from watching this movie. The only reason it’s lower on this list than some others is because it’s a little hokey next to some of the real horrors we face as people in today’s world. Don’t underestimate its scare-power, though.

PLOT: Five friends travel to a cabin in the woods, where they unknowingly release flesh-possessing demons.

WHY I LOVE IT: The Evil Dead is a classic favorite of mine. My love for it actually began with Army Of Darkness – the third film in the Evil Dead trilogy. I loved the movie so much that when I eventually learned there were more movies, I had a marathon and rented them all. I was surprised to find that The Evil Dead was actually scary compared to the silly dark humor of the third installment. The first film is full of tense and dramatic camera shots, difficult moral decisions, and rape by plant life. Pretty intense. Still, the reason this film falls behind some others is because some of that traditional Sam Raimi camera work sometimes produces humorous results, which is his trademark but makes for a less-serious scare.

PLOT: On Halloween night of 1963, 6-year old Michael Myers stabbed his sister to death. After sitting in a mental hospital for 15 years, Myers escapes and returns to Haddonfield to kill.

WHY I LOVE IT: To be honest, real killers scare me more than monsters, more than ghosts (or at least that was the case years ago). It makes sense, because real killers actually appear in our society from time to time. As a child, nothing was more terrifying to me than Michael Myers – a slow, inevitable killer who stalked his victims without seeming to tire. He could kill you with his knife. Or with a piece of rope. Or with his bare hands. It didn’t matter – he’d find a way. He represented death in its purest form – unavoidable, unstoppable. The only reason it falls below some of the others on this list is because compared to events and the news nowadays, even Michael Myers’ methods seem a bit tame. They’ve upped his game in recent years with reboots, but it’s increasingly hard for horror to compete with real life. Still, Halloween holds its ground as a scary slasher film which should be a staple of any Halloween night movie marathon.

PLOT: Several people are hunted by a cruel serial killer who kills his victims in their dreams. When the survivors are trying to find the reason for being chosen, the murderer won’t lose any chance to kill them as soon as they fall asleep.

WHY I LOVE IT: Freddy Krueger is a household name, and is one of the most iconic horror film villains in recent history. His sadistic humor, creepy claws, and penchant for coming for you when you’re at your most vulnerable state (sleep) combines into one scary package. Though later sequels pushed Freddy into silly territory, the first film was pretty horrifying. Still – the reason that this film falls below others on my list is because of that humor. It was still there, right in the beginning. Freddy is one sarcastic killer. A Nightmare On Elm Street is sure to effect your dreams to this day if you’re anything like me, though. Freddy made entire generations afraid to go to sleep.

PLOT: A journalist must investigate a mysterious videotape which seems to cause the death of anyone in a week of viewing it.

WHY I LOVE IT: When I first watched The Ring – it freaked me out for weeks. Admittedly, ghosts scare me, and The Ring was one of the scariest horror movies I could remember seeing since the 1980’s. It appealed to the supernatural scare factor, as well as that whole “urban legend” culture we all seem to be fascinated by. The director of The Ring really knew how to maximize the scares in this film. Still, the reason it falls behind some of the other ghost films on my list is because the less-than-scary ending, as well as the fact that once you know the entire story…it isn’t as “scary” anymore. Still – the atmosphere and the tragedy surrounding Samara’s character should have you looking over your shoulder while in the dark, or thinking twice about answering your cell phone when it rings (no pun intended). Plus – Naomi Watts is a babe. BONUS. 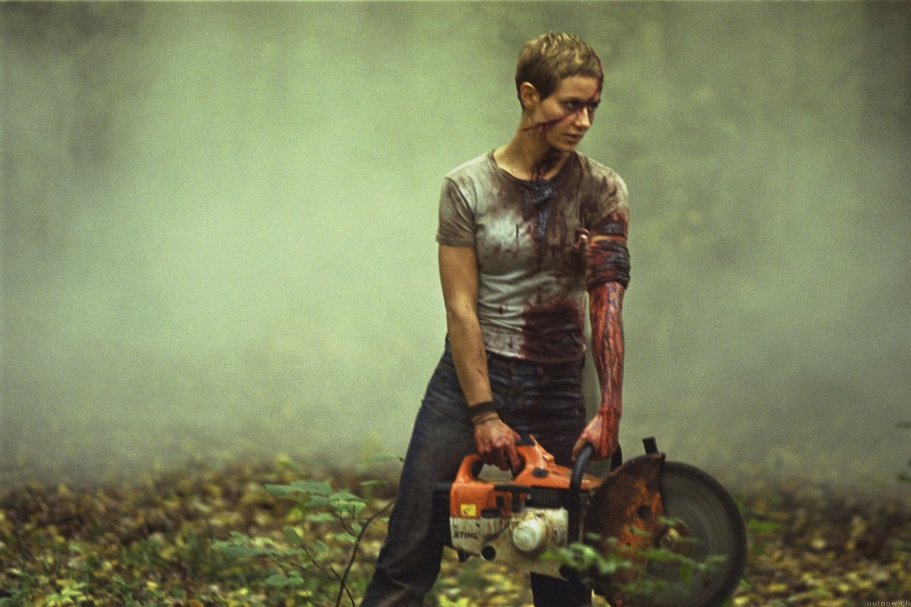 PLOT: Two college friends, Marie and Alexa, encounter loads of trouble (and blood) while on vacation at Alexa’s parents’ country home when a mysterious killer invades their quiet getaway.

WHY I LOVE IT: High Tension was a surprise hit with me. Generally, when watching horror, foreign films can be hit or miss with me and I thought that since it was sort of marketed as a slasher film – High Tension would be, at best, worth watching once. But the complex themes and the spin on the traditional horror protagonist had me invested more than some others in the same genre on this list. Though the story itself is sort of simplistic – Marie is the main draw to this, and through her you experience some truly psychological perspectives. Give this one a watch, though be careful if you don’t like gore and blood spatter in your horror flicks. 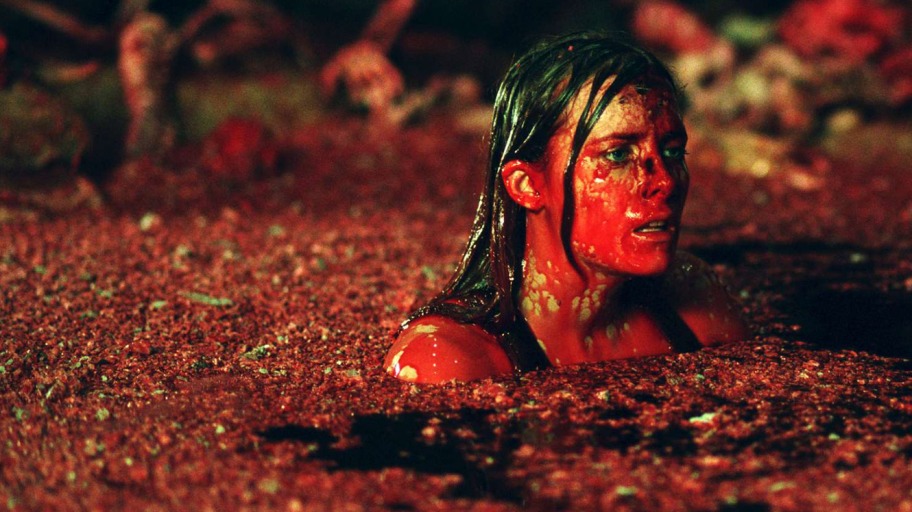 PLOT: A caving expedition goes horribly wrong, as the explorers become trapped and ultimately pursued by a strange breed of predators.

WHY I LOVE IT: To be honest, I didn’t really know what to expect from The Descent when I first saw it. It was slow to start, had lots of women characters, but then it turns out it has endured as one of the scariest films of all time for me. The enclosed spaces, the strange predators, and the relationships of the women in the film have kept this consistently interesting no matter how many times I’ve seen it. It feels visceral, it feels raw, and it is just downright scary. I think the reason this is on here and Alien is not is because Alien feels removed from reality due to it being set in space, while this feels like something that could actually happen. The reason this falls to number three instead of one or two is because of its slow pace, but please make sure to give this movie a shot if you’re looking for a fright-filled night of movie watching. You won’t come away disappointed.

PLOT: After Carlos, a 12-year-old whose father has died in the Spanish Civil War, arrives at an ominous boy’s orphanage he discovers the school is haunted and has many dark secrets that he must uncover.

WHY I LOVE IT: I didn’t see this film until just a couple of years ago during a Halloween movie binge at a friend’s house. It was Guillermo Del Toro directing, so I thought the movie would be good – but I didn’t realize just how creepy the movie would turn out to be as well. Going further than just being scary, The Devil’s Backbone also weaves a great story into the mix. When you watch The Devil’s Backbone – you quickly become invested in the characters, and thus you experience more emotional empathy with them (leading to bigger emotional responses such as fear or sadness). It really is an underrated film in the horror genre, and I think is just narrowly beaten out by my number one horror film choice – which I will get to next. Please give this one a watch if you love ghost movies like I do! 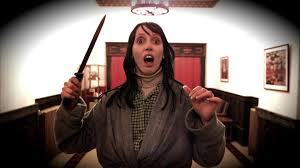 PLOT: A family heads to an isolated hotel for the winter where an evil and spiritual presence influences the father into violence, while his psychic son sees horrific forebodings from the past and of the future.

WHY I LOVE IT: To me, The Shining is the perfect horror film. It combines several different types of horror elements. Ghosts. Possession. Isolation. Murder. Psychological. Spiritual. It also tackles different things like abuse, mental health. It showcases the breakdown of the modern American family. Hell – I love Stephen King, and even though this film departs from the King’s story in several different ways – I believe Kubrick’s vision was an improvement in many ways as well. Danny is a likable protagonist and we easily identify and sympathize with him. The Overlook hotel is one of the creepiest horror settings in recent film history. And Kubrick’s sweeping shots and intense cinematography lends itself very well to the horror genre. I dare you to watch this film and not be scared at least once. I look forward to other horror movies trying to surpass this film in its genre-defining glory.

Now that those are out of the way, here are some Honorable Mentions: Alien, 13th Warrior, The Exorcist, Poltergeist, Let The Right One In, Jaws, The Hills Have Eyes, Texas Chainsaw Massacre, Predator, Dolls, Child’s Play, The Omen, The Strangers, Dawn Of The Dead, 28 Days Later, Puppet Master, Phantasm, Hellraiser, Jacob’s Ladder, Children Of The Corn, Cabin In The Woods, The Thing, Slither, Friday the 13th

What are some of your favorite horror films? Let me know in the comments below!