When asked if they would like to have a bowl of macaroni and cheese, most Americans will undoubtedly suffer no confusion as to what is being proposed to them. “Do I want a bowl of macaroni and cheese? You mean that curved, cylindrical, wheat-based pasta smothered in delicious, melted cheese? Sure!” However, the history of the word macaroni deals with more than just the hearty pasta, and there have been many different terms and different things associated with the name of Kraft’s favorite pasta since the 1700’s.

For example, had you asked a person the same question in or around 1760, they might possibly be confused…and a little bit worried. “Marry! What dost thou ask’st me!?” they might exclaim, for around that time, the Macaroni Club came into existence. A “macaroni” in this case would be a well-traveled man, or going even further – a “fop” or a “dandy.”

“Dost thou wantest a bowl of me?”

So you can imagine the confusion one would encounter, having asked someone if they’d wanted a bowl of “macaroni” and cheese at that time. Thoughts of barbarism and maybe even cannibalism would surely cross their minds.

If you asked someone in or around 1830, “Do you want a bowl of macaroni and cheese?” they might suspect you of being a foreigner with strange tastes, for a “macaroni” then (and now, come to find out) was a species of penguin; Eudyptes chrysolophus, or in full, macaroni penguin, which was named because of the shape of its crest.

However, I wouldn’t be surprised if the adventurous people of that time would have agreed to try a bowl of “macaroni penguin and cheese.” Also, in Scotland, canaries were often known as “macaronis,” so the same thing would most probably happen with them since most of Scotland, in their oppressed state, had likely not heard of the Italian-made pasta in the 1700’s that well-traveled men from England were able to sample and develop a taste for.

Also, in the 1700’s, “macaroni” was a type of burlesque poetry, in which “vulgar” words were translated into Latin and Latin words were modernized. There was also a gambling room in Newmarket by the name of “Maccaroni.”

In the West Indies, had you asked if someone would want a bowl of “macaroni and cheese,” they might think that you are asking them a very strange thing. However, they would most likely enthusiastically say “Yes!”, especially if it was a child being asked, because in the West Indies a “macaroni” is a coin that’s worth approximately a quarter of a dollar.

Undoubtedly, some wood carvers or carpenters might become very confused as well if you had asked them in the 1800’s if they wanted a bowl of macaroni and cheese. A “macaroni” to them might be a tool that they used to chisel wood with. Similarly, musicians might be confused as there exists a musical instrument called the “macaroni fiddle.” 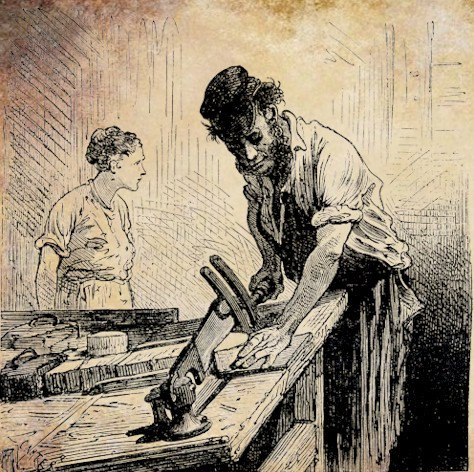 “Martha, hand me my macaroni. By god, I’ll have this done by dusk!”

There are several other words that share their roots with the word “macaroni.” A “maccarone” (macaroon) is considered the singular form of macaroni. One might be called “macaronic” if someone perceives them as a “dandy.” The word dates back most likely earlier than more than two-hundred years ago.

I find comfort in the fact that most of these different forms of “macaroni” are either not in use today, or not widely known about. So, when someone asks if I want a bowl of “macaroni and cheese” nowadays, I am sure I’m getting delicious pasta and not a cheese-smothered “dandy” or a bowl of loose, foreign change. Bon apetit!

Categories: Away With Words, Opinion