Friend Files is a feature I’ve added to Away With Words, this being the sixteenth installment. Past installments appear under the “Friend Files” tag on my blog. I will be interviewing a friend of mine and showcasing why they are a friend to me and what I like about them, and also a mini-interview (five questions) that detail what they think of me. It’s a way to acknowledge my friends out there and what they’re up to and also introduce them to my larger group of friends, acquaintances, and anyone else who might be interested in reading.

Today, I will be talking about Linsey Albrecht. Before I get into what I think of her, here is my mini-interview with Linsey (exchanged over Facebook) where she jotted down just a few thoughts:

LINSEY ALBRECHT: I came to Maine from Spain after 6 years without rain. No, seriously, there was a drought the whole time I lived there. My dad was in the military, which is why I was in Spain and, sadly, my ADHD wouldn’t allow me to learn Spanish. ¡Qué lástima! Fast forward to 20 years later, I am now 28 years old and work as an ed tech III at an elementary school, as well as a part-time Behavioral Health Professional. It’s fun, I get to boss kids around all day and sometimes I make them cry. I’d do that crap without getting paid, but, it’s an added incentive. As far as hobbies go, I like puzzles, long walks, and puzzling long walks. I’m into fish keeping, as well, and own four fish tanks (it’s an addictive hobby—don’t do it). Another thing I enjoy doing is cosplay. Every once in a while I’ll hit up a comic-con or costume party as a lady Boba Fett. Eventually I’d like to try my hand at a few others, such as Harley Quinn from Batman: The Animated Series, Chiana from Farscape, and a lady Pyramid Head from Silent Hill. Costuming might seem strange to some people, but it always appealed to my creative side. Throughout my life I admired movie monster creations and would see something on the screen and decide that I wanted to be that for a day. I discovered that, when you’re out in costume, kids and adults treat you as if you are the character, and there have been so many times I’ve heard the words “you just made my day.” So, that’s part of why I do it, but also it’s because, dammit, Boba Fett is so friggin’ cool.

Linsey Albrecht: It was at Coast City Comic Con of 2012 and you were dressed up as Abraham Lincoln: Vampire Hunter, which was very cool. You looked extremely different from your actual self. You tend to adapt to your costumes like a chameleon. Anyway, I think we met while at the costume contest. I was playing around with a fake bloody finger I bought. I don’t remember how we started hanging out, except that you friended me on Facebook, drew a really sweet pic of me and other people’s costumes, and we started chatting, so it must have evolved from there.

LINSEY ALBRECHT: There are lots of fond memories I have of you. Multiple comic cons, seeing Rifftrax Live, walking around the SMCC campus while talking about ghost hunting (which we still need to do), eating Bryce’s questionable mac and cheese and playing a dark card game (Gloom), dancing at Empire as Boba Fett while you were in your Obi Wan cosplay, and eating poutine for brunch at the Little Tap House. Oh, and you and your girlfriend Dorothy both helped me move out of my apartment. That made me appreciate you extra as friends.

LINSEY ALBRECHT: Because you’re a good person and I want to keep good people in my life. I enjoy the thousands of Facebook status updates you write daily and, if it weren’t for you, I’d never have any likes on the things I post. Plus, we share a lot of the same geeky interests, as well as non-geeky interests. And also, why not?

LINSEY ALBRECHT: I dunno—I’m not too involved in creating my own media, so…my microwave? The cord sits behind a huge, heavy shelf…it’s hard to get to…

I did, indeed, meet Linsey during the activities surrounding Coast City Comicon back in 2012. It was my second year going, and I had a new girlfriend at the time – Dorothy. Well, Dorothy and I, at a costume contest here in Portland, Maine (At Geno’s, if you’re savvy) noticed a lady Boba Fett walk in with someone dressed as The Stig. Even with full facemasks, the two of them seemed like they had a lot of personality. This was verified during the actual convention when, in the back room of another (official) convention costume contest – I witnessed Linsey shoot Bill Corbett of MST3K fame (who was one of the judges) in the head with her blaster and then saunter off after a little spin. It was amazing, and I knew I had to be this person’s friend.

Since then, as she’s mentioned above, we’ve done many fun things. We’ve had her over to our apartment here in Portland, we’ve done brunch together, we’ve gone and seen Rifftrax movies together a few times. Linsey and I seem to share a similar vein of humor, and I think when we chat, we are quick to laugh about things. Linsey is also super-nice and has driven to Portland just to give me a ride to events or to hang out in Portland rather than have me drive elsewhere.

All in all, Linsey is just a really cool person. She’s smart, pretty, very funny, very kind (she takes good care of fishies), and she is just the right kind of sarcastic. I’m glad to count her among my friends and I hope we’ll stay friends for a long while. Here are some photos highlighting cool moments from my friendship with Linsey: 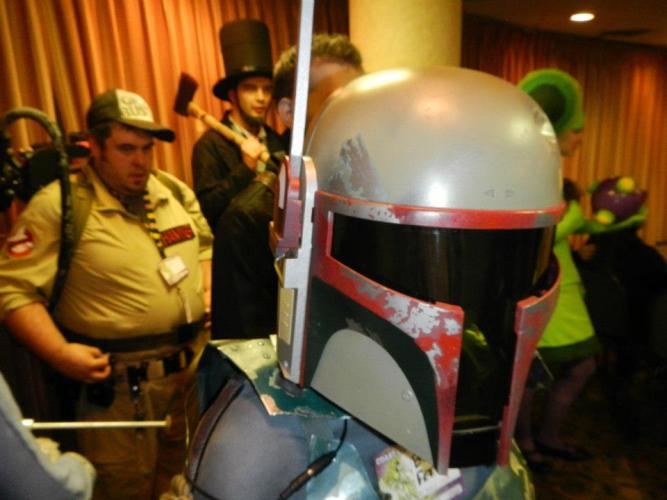 From the back room where the costume contest was taking place, when I first spoke with Linsey. I am in the back as Abraham Lincoln, she is in the foreground as Boba Fett. 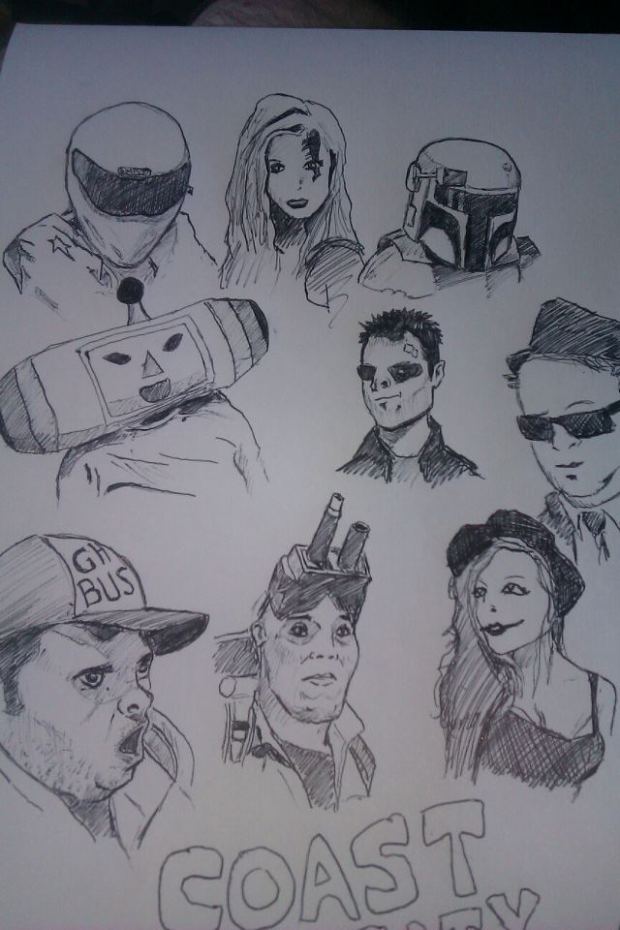 A drawing I did of some of the characters from Coast City Comicon. Linsey is on the top right as Boba Fett (Or, Booba Fett as she called herself)

Me as Abraham Lincoln next to Linsey and The Stig, her former boyfriend.

I had to add this one, because I feel cooler knowing people who have fired guns.

She likes animals, another thing we have in common. I tend to be friends with people who enjoy the small furry creatures of the world.

I like Linsey’s sometimes-silly nature, too. I can be the same way, so it’s nice to know I’m not the only one.

Me with my girlfriend Dorothy posing with Linsey next to a Ghostbusters car at Bangor Toy And Comicon 2015.