Friend Files is a new feature I’ve added to Away With Words, this being just the tenth installment. I will be interviewing a friend of mine and showcasing why they are a friend to me and what I like about them, and also a mini-interview (five questions) that detail what they think of me. It’s a way to acknowledge my friends out there and what they’re up to and also introduce them to my larger group of friends, acquaintances, and anyone else who might be interested in reading.

Today, I will be talking about Alexandria Delcourt. Before I get into what I think of her, here is my mini-interview with Alex (exchanged over Facebook) where she jotted down just a few thoughts:

ALEXANDRIA DELCOURT: I live in Madison, WI and teach English at the University of Wisconsin-Whitewater. I play the guitar and the violin and piano, write poetry, and love cooking! Lately, I’ve been spending a lot of free time watching nostalgic TV like Frasier, LOST, and Ally McBeal. I sometimes feel like I’m TOO MUCH like Ally McBeal, but less 90s.

ALEXANDRIA DELCOURT: We met at Stonecoast in our first residency! You were one of the first people I talked to on the bus I think. You told me your name and I was like “Carro, is that Spanish?” And you were like “No. It’s French but it got changed” or something. And then for the rest of the residency, any time I noticed you being shy I tried to embarrassingly make you participate. I remember you laughing. I remember your fedora.

ALEXANDRIA DELCOURT: I have zero good memories involving you. Just kidding. Remember that time you and me and Frank stayed at Enza’s after AWP in Boston, and we all went to Cuchi Cuchi and got coordinating drinks and free dessert? And remember when Enza lost her phone and we had to walk down to a 7/11 where a guy who said he had it wanted to give it back? And we had been walking all day and my feet were hurting and so Frank and Enza walked ahead because Enza walks like a madman and you walked more slowly with me behind and we were like the backup if any shit went down.

ALEXANDRIA DELCOURT: We are still friends because we became close in a couple little offshoot friend groups. There was a year in there when a few of us FB chatted like, every night, and shared our woes and triumphs with each other virtually, and that was all of our support systems in hard times. You don’t become unfriends after that.

Alexandria, or “Alex” as our friends like to call her, is one of my first real friends I made at Stonecoast. As she said above, we had briefly talked on the bus about my name and how one of my French-Canadian ancestors had changed it from “Caron” to “Carro” in order to make it sound less French (inadvertently changing it into Spanish). Since I didn’t know too many people, and since we had already chatted, I spoke to her when I’d see her. At first, it was really only in passing because I was shy around people, but then during my second semester she became part of my core group of Stonecoast friends consisting of me, Alex, Frank, and Enza.

We all went to a writing conference in Boston called AWP and I was able to enjoy many adventures during that great week with Alex and our other core friends. We walked all over the city, we ate at great restaurants, we went to snazzy bars. It was great getting to know her, and often, afterward, we would chat online or randomly chat in the hallways in the Stone House where we went to our workshops.

During one of our summer semesters (I think it may have even been our first one), I gave Alex a ride to the airport when it was time to go home. She explained that her family had originally been from Maine and that they loved Amato’s so she wanted to stop for lunch at the one in Brunswick. I agreed, having long been a fan of Amato’s food. We ordered our food, had a good conversation and some sandwiches. It was a really nice moment and it was good to get some one-on-one with her since the majority of the time we hung out it was with our mutual Stonecoast buds. We also talked the entire way to the airport, and that is still one of my favorite Stonecoast memories.

Alex is a go-getter. She seems to have little moments of panic during stressful events, but I’ve seen her come out on top every single time. She is a wonderful writer, she is a good friend, and in the game of life – I know Alex will go far. It’s how she’s made. She networks, and she does it well. She has a really great sense of humor, and she and I have sparred many times back and forth online with sarcastic and overly-depressing remarks for the sake of comedy. She gets my sense of humor and I get hers, and I like that a lot. Alex also is really great at lending an ear. There have been a few times when she’s given me really solid advice on writing and on life in general, and I will always appreciate that about her.

I’m glad that I became friends with Alex.

And, with that, I will leave you with some photos relevant to my friendship with her: 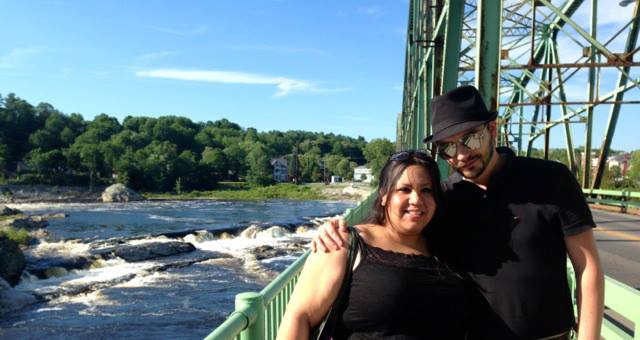 Alex posed with me on a bridge in Brunswick, Maine. Photo by Enza Vescera. 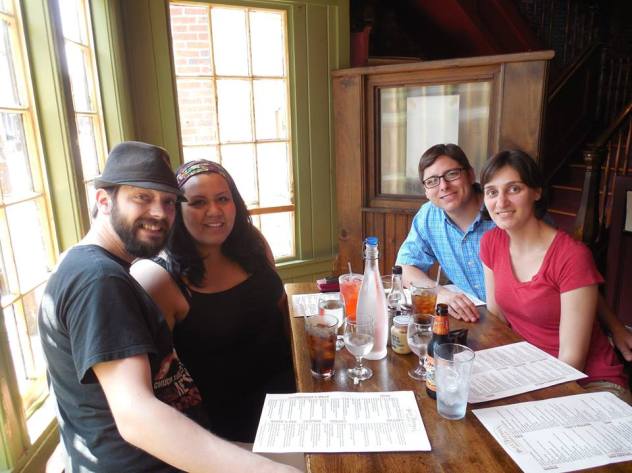 Me with Alex on the left at Bull Feeney’s in Portland, Maine. 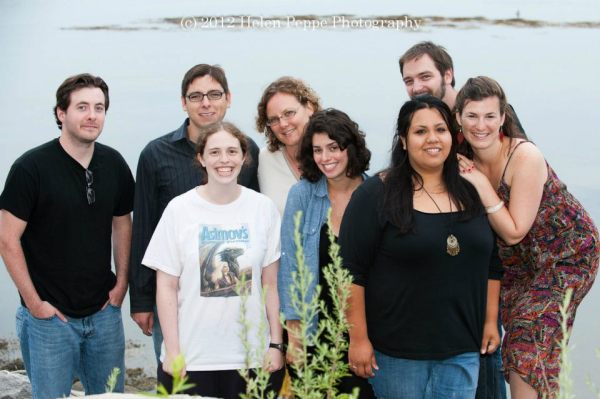 Alex with myself and a bunch of other first-semester Stonecoast students. Photo by Helen Peppe. 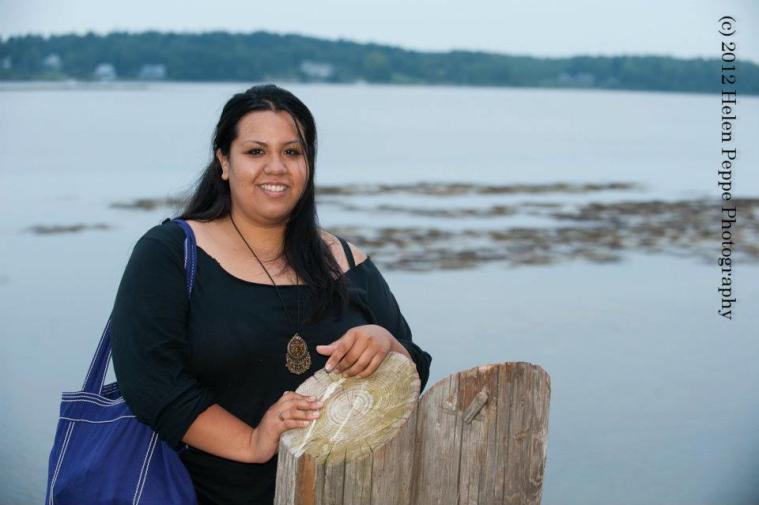 Alex during one of our community dinners at the end of summer residency. Photo by Helen Peppe.

Alex trying on hats at the Garment District in Cambridge during AWP week.

Alex playing a violin her father made for her. She’s so talented.