Friend Files is a new feature I’ve added to Away With Words, this being just the seventh installment. I will be interviewing a friend of mine and showcasing why they are a friend to me and what I like about them, and also a mini-interview (five questions) that detail what they think of me. It’s a way to acknowledge my friends out there and what they’re up to and also introduce them to my larger group of friends, acquaintances, and anyone else who might be interested in reading.

Today, I will be talking about Dylan Cowsert. Before I get into what I think of him, here is my mini-interview with Dylan (exchanged over Facebook) where he jotted down just a few thoughts:

DYLAN COWSERT:  If you’ve ever walked around the Greater Portland area and witnessed a man wearing red Vash glasses and a Venom symbiote [hoodie], chances are in your favor that you’ve seen me. I enjoy tapping into my artistic side, searching for something nifty to photograph or making some form of solid expression. I’ve been known to play a card game or two with friends, watch an anime or twisted movie, fiend for caffeine, be a bit tardy to occasions, spend the occasional Friday evening at a pool hall, and, being an adventurer at heart, take a spontaneous expedition whenever I have the chance. In my natural habitat, I can be seen binge-drinking cocoa, drowning myself in musical metal and playing vintage video games (most often Majora’s Mask, if not a multiplayer game among peers).

To best fund the roof over my head and the long-distance treks I love to make, I currently work as a distribution assistant at the main local newspaper, the Portland Press Herald. It pays the bills, I move around a fair bit, and I get to work with some friends. I have a lot of like-minded peers, which can make for some interesting chess scenarios at lunch or Mario kart races after a long day. All things considered, I don’t mind the daily grind.

I’m very close to my immediate family. All of my other relatives are hundreds of miles away, which makes ourselves the best support system we have. It also makes us the best audience for our own bizarre thoughts of comedy. Apparently, the entire family shares the same twisted tastes in jokes, fondly referred to as “sharing the same kinks in our DNA”, which makes for very entertaining situations when the rare rendezvous occurs between immediate members and relatives of distant lands.

With the occasional caffeinated jumpstart and hatching of a need or good idea, it tends to be an interesting life.

DYLAN COWSERT: We encountered each other at PortConMaine of 2014, an anime and gaming convention, yet another multiversal melting pot of cultures among characters. I felt the need to capture the moment and document it as part of my daily life adventures.

DYLAN COWSERT: It’s not every day Obi-Wan Kenobi clashes beams with Venom, is it?

DYLAN COWSERT: I like to hope in future adventures with the characters I meet along my journey. In addition, I tend to enjoy your facebook posts, reading and witnessing the daily activities of a Jedi. You and Dorothy both seem like cool people who do what they can to lead interesting lives (it’s not every day one witnesses an alliance between Obi-Wan and Dr. Doom, either), and I like the idea of meeting and being around memorable adventurers. It promotes more memorable adventures to occur in my life, a lifestyle I feel I’d thrive off of wondrously.

Okay, before I get into my own spiel – I will honor Dylan’s request and share the photo he’s talking about: 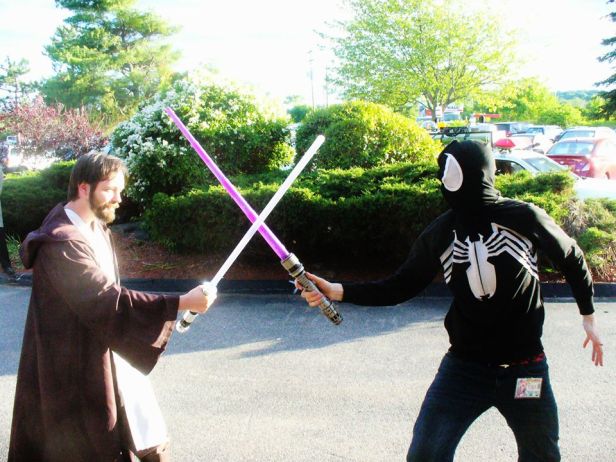 Me as Obi-Wan Kenobi on the left and Dylan on the right in the Venom hoodie. Taken at PortCon 2014 in South Portland, Maine.

This makes it really easy to segue into what I was going to say anyway. I met Dylan very briefly at PortCon 2014. It was one of those moments unique to conventions – a guy in a Venom hoodie came running toward me with a lightsaber of his own outstretched in an offensive stance. I laughed, then swung my own lightsaber up to defend against his attack, taking on a more serious face for the cameras. This was our first meeting and we didn’t interact too much longer at the con itself. Conventions are a swirling mass of photos and people and artists and consumers and it’s hard to stay in one area for too long a time.

Well, when Dylan and I went our separate ways, I definitely remembered him and then sooner or later…once the photos from PortCon started to circulate on Facebook and people began to tag their friends, I was tagged in one of his photos and we became Facebook friends from there.

I haven’t known him for too long, but I enjoy reading his posts. He doesn’t post a ton but when he does, it’s always about music, or movies, or video games, or photos of his adventures. As Dylan has said about me, I think he has an adventurous spirit, and the fact that he loves to go to conventions in a Venom hoodie is really great – you don’t see that too often. This is why I’m friends with Dylan. I know that over time, we’ll see more of each other at conventions and whatnot around Maine. Until then, we have Facebook, adventure, and our mutual love of symbiote costumes and Star Wars.

And now, I will leave you with some relevant photos of Dylan. 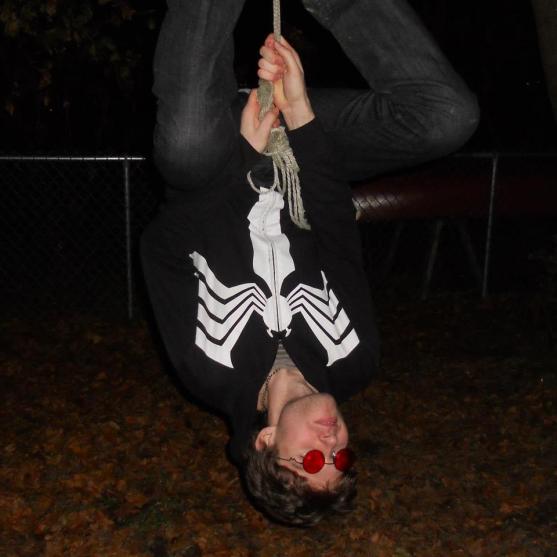 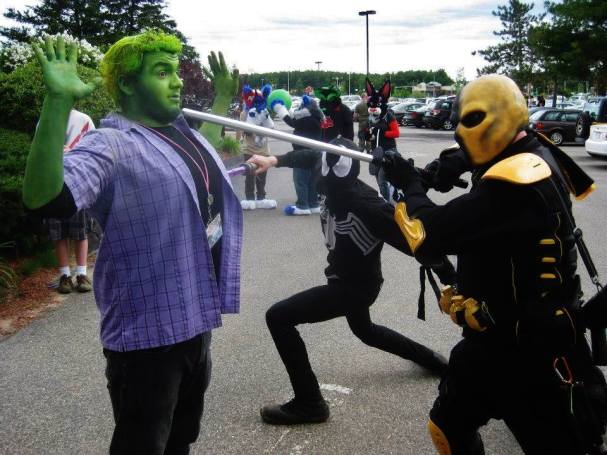 Dylan in the Venom hoodie at PortCon 2014 in South Portland, Maine. Our mutual friend, Matt Shaw/Slade Wilson is on the right. 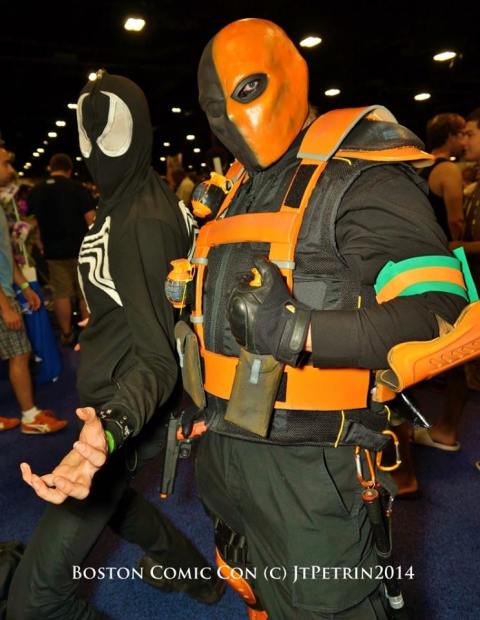 Dylan at Boston Comicon on the left with our mutual friend Slade Wilson on the right. Photo by JtPetrin Photography.

Dylan is a musician as well. Photo by Michael Shugars.