Friend Files is a new feature I’ve added to Away With Words, this being just the second installment. I will be interviewing a friend of mine and showcasing why they are a friend to me and what I like about them, and also a mini-interview (five questions) that detail what they think of me. It’s a way to acknowledge my friends out there and what they’re up to and introduce them to my larger group of friends, acquaintances, and anyone else who might be interested in reading.

Today, I will be talking about Tyler Gaylord. Before I get into what I think of him, here is my mini-interview with Tyler (exchanged over e-mail, since he’s in California currently) where he jotted down just a few thoughts: 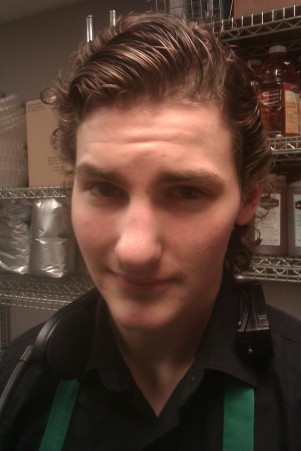 TYLER GAYLORD: Well,  I’m an actor.  I’m a decent one at that but I have a lot of work to do.  My ambition is to be like Tom Cruise and when I get my moment, make the most of it with the skills that only me being Tyler Gaylord can provide.  Things that set me apart from many other people, my own combination of talents, emotions, and mentalities.  Then use those to build a career while working on my acting skill at the same time, and hopefully continuously challenge myself just like Cruise has throughout his career as he has become a better actor.  (Some of his greatest stuff happened 15 years after he started.  Val Kilmer said Tom Cruise is the only actor he knows who got better with every movie).

I wasn’t always an actor.  Or maybe I was.  Basically I used to always enjoy being different characters and being crazy just to gain attention.  I loved being loud and making people laugh.  That naturally translated into performing on stage like many kids do.  I was also very good at sports and I played a wide variety of them, but none more than tennis.  I would play as much as I possibly could.  In eighth grade I quit everything to focus on tennis, with the ambition to play Division 1 and become a professional player.  My ambition though, was greater than my body, and due to the overstress I injured myself.  Tendonitis in the elbows is what I got as a reward for sacrificing my teenage years for tennis.  An injury that after 9 months of rest, physical therapy and constant dedication to healing, still persists to this day four years later.  My tennis career, as I knew it, was over.  I could no longer, and can still no longer, play at the level I once did.

It was tough for me, having sacrificed so much of my life and my families money and time only to have almost nothing to show for it.  I didn’t build any strong relationships with really anyone, I had friends, but they were more of acquaintances due to me having to play tennis all the time.  I had no social life, I gave up mostly all of my other hobbies, and I was over halfway done with my high school career.  I was lost, I cried a lot, I was depressed, I even contemplated suicide because I felt like I had nothing to live for because my entire life plan blew up.  It was in this dark period I rediscovered my love for acting.  I finally had a cast of people I could call friends, a purpose in my life, and being someone else helped me forget about tennis, even if it was just for a little while.   Ever since then, I have dedicated my life to acting, maybe it was my path all along, I was good at tennis, but I was never great, and maybe that was a sign to move on, either way, life has a funny way of steering us in the correct path even if it’s not always the path we started out on.  Now, I know I will make it as an actor, because I already failed at one life goal, and I can’t face failure at another.  So I use that pain to fuel me.  And similar to Cruise, who was a great state wrestler, but was injured his senior year, I will use the lessons learned from sports and apply them to my film career.

I live in Los Angeles, and it’s wonderful out here.  Beautiful people, buildings, nature, and weather everywhere.  I miss parts of Maine, especially Cliff Island on the Casco Bay every day, but I know that if I’m successful as an actor, I’ll have the money and control over my schedule to make sure I get the best of both worlds.  I grew up on a small family farm in a small town called Hiram, ME.  Overall, I’m bringing my good ol’ Maine work ethic to LA.  So far, it’s gotten me pretty far.

TYLER GAYLORD: Oh the good old Saco Starbucks of course!  You and me were the barista extraordinaires!  Not really, but we were good at our jobs.  I actually met you first, then Matt, but I remember when I actually got hired, I came in because Jill never updated me on when I would work, and she was impossible to get a hold of (typical Jill with new hires!) and when I came in, I asked you where the schedule was and we introduced ourselves.  Good times….

TYLER GAYLORD: Man I have way too many to actually pick one.  The numerous conversations, debates, and reenactments of films, actors, politics, pop culture, etc. we had working at Starbucks.  The many wing nights we had and how you were always down for one, which always made me happy, knowing that I could count on you.  The card games out back we played in the dead of winter when we wouldn’t get a customer for hours.  The sheer idea of you as Obi-Wan and me as Anakin when I had my long hair.  How you laughed at almost all of my jokes, the really dumb ones, the smart ones, the crazy ones, it didn’t matter, you either understood the jokes and found them funny, or laughed just because you’re a good guy like that!  Our numerous conversations of Tom Cruise and the many puns and wordplays we created involving him.  The gay porn king with all of my “slaves” and my very intimidating  staff.  (Anyone reading that, it is as bad as you probably think, it was one of our worst, most disgusting, jokes of all time which also was one of our most  hilarious ones.)  Not to mention the fun it poked at my last name, so it was perfect!  Overall man, I don’t think I could pick just a good memory, I have a lot that I love man and I’ll always cherish them!

TYLER GAYLORD: Because we’re too lazy to delete each other.  Haha nah seriously though, because I think we understand each other and whenever I come back to Maine it is always great to catch up and go get some wings.  Also, long term, I think it will be nice to see where we end up and what we can do to help each other; you as a writer and me as an actor.  So overall, I think we will always be in contact.

TYLER GAYLORD: Just my blog would be great.  Thanks Joe, this was fun!  http://igluaydouglouay.blogspot.com/

Tyler’s right – we first met at my old Starbucks location in Saco, Maine. At the time, I was a shift manager and at first I didn’t see too much of him so I wasn’t sure what to think. He seemed really outgoing and when he first started working with us, it was around Halloween. I started talking to him one day while he was working and I was in line, just coming in for a drink as a customer on my day off. I mentioned that I cosplayed as Obi-Wan Kenobi, and his eyes lit up and we started discussing Star Wars, each on opposite sides of the counter. We mentioned possibly doing a doubles cosplay as Obi-Wan (me) and Anakin (Tyler) – seeing as he had the right appearance for it. Immediately, Tyler started spouting off Anakin Skywalker lines, a serious look taking over his face as he stepped briefly into Anakin’s character.

Sadly, Tyler and I never did manage to go to a cosplay event together as Anakin and Obi-Wan but who knows what the future holds. As for now, Tyler is pursuing his dreams of being a professional actor in Hollywood. If you’re at all interested to see what that sort of life is like, you should really check out his blog (link above), to read about his battles with finances, job hunting, loneliness, life in a new environment. He does all of that with a real positive spin that makes you root for him. He doesn’t seem to let little things get him down, and it’s fun to see him moving forward, toward his version of success.

One of my favorite memories of Tyler is one night when he and I were with a group of co-workers around a fire. The party was winding down, and Tyler had been telling me earlier in the day about his love for Tom Cruise and what he symbolized for him. Both of us were due to soon be leaving the store, he for California and I for Portland, Maine. I felt like we had some really good conversation that day. He clapped me on the back and said “Joe, I’m glad you came tonight.”  That night marked the first time I think we became actual friends VS solely work friends. Ours was a simple and casual type of friendship, and still is. I believe that were we not to see each other in person for ten years, when next we did see each other we’d be able to connect like no time had passed.

Tyler can be a bit stubborn at times, but the reason that I am glad to have him as a friend is because of not only his loyalty as a friend, but how he actually converses with you as a person. Some people just talk at you and then have trouble paying attention to what you say. Tyler isn’t like that. He seems to put everything out there, whether he’s judged or not, and that takes guts. I also admire his persistence in going after what he wants and his courage in doing the same. All in all, he’s a fun guy and I’m glad we know each other. We may have hung out only briefly during the short time (a year) that I worked with him, but I don’t see myself losing contact with him anytime soon.

And now, I leave you with some relevant photos and one fun video of Tyler. 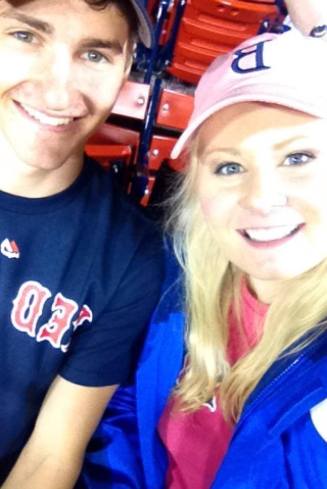 Tyler and his girlfriend. I’ve worked with both of them at my old store. Great people.

At work, I liked to draw portraits of my co-workers. This was a photo I took with my phone at work for reference at a later date. Never got around to the drawing unfortunately.

In this video, Tyler and his girlfriend mess around while I filmed them and played music from my laptop (and laughed my ass off). These two are silly and perfect for one another. This is pretty much the essence of the kind of fun we had on our shifts at work together (though we definitely worked hard, as well) and what I’ll miss about him while he’s in California.