Friend Files is a new feature I’m adding to Away With Words, hopefully at least once every week. I will be interviewing a friend of mine and showcasing why they are a friend to me and what I like about them, and also a mini-interview (five questions) that detail what they think of me. It’s a way to acknowledge my friends out there and what they’re up to and introduce them to my larger group of friends, acquaintances, and anyone else who might be interested in reading.

Today, I will be talking about Rick Parker. Before I get into what I think of him, here is my mini-interview with Rick (exchanged over e-mail) where he jotted down just a few thoughts: 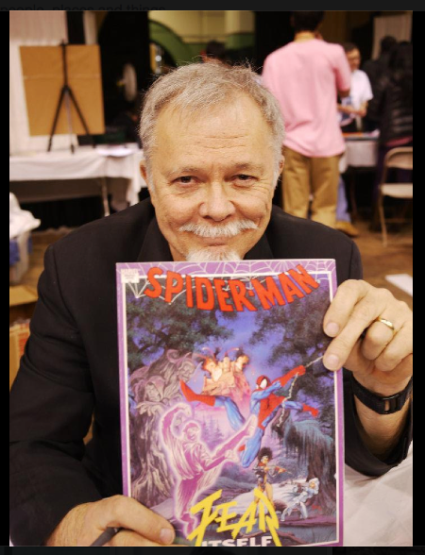 RICK PARKER: I am an artist from Savannah, Georgia who went to work at Marvel Comics in the mid 1970’s because I needed money and I couldn’t make a living doing painting and sculpture in New York City even though at the time, I was doing some of the best work of my career. There, I eventually re-discovered my love for drawing and comics which I had growing up. Best known today as the artist of MTV’s Beavis and Butt-Head comic book (Marvel, 1994-96). I am married to the writer Lisa Trusiani (a Maine Native) and we have two sons who are in college. We live in the Great State of Maine.

RICK PARKER: I saw you at a comics convention in Portland, Maine in 2013.

RICK PARKER: You were dressed as Obi-Wan Kenobi. I was struck by how much you looked like me when I was young. I told you that, “I don’t want to alarm you, but I looked remarkably like you when I was your age.”

RICK PARKER: You’re an unusual person. Open and interesting and a good writer.

RICK PARKER: Although I like to draw, I am enjoying writing my blog about my life experiences. It’s https://autobiographyofaformerzygote.wordpress.com/

First off, all of you reading this – if you don’t know Rick already, you should check out  his artwork but definitely also the blog above. He has been writing about his life as a kid, his life in New York, his life in the military, his life in the Marvel Comics Bullpen. He uses a particular brand of sly humor that is 100% his own. Aside from that, Rick is very talented and manages to attend multiple conventions around New England where he delights fans with his zany and often commentary-laced artwork. He’s worked on Spider-Man books with Todd McFarlane (!), on the Graveyard Book with Neil Gaiman (!), and also as he said above – on MTV’s Beavis and Butt-Head (along with parody books like The Farting Dead, and Harry Potty And The Deathly Boring) He is a busy guy, but he is also one of the nicest and most enthusiastic people you will meet.

I first met Rick at Coast City Comicon back in 2013, as he wrote above. My girlfriend Dorothy bought me a piece of art from him, I think at MECaf during the summer in 2012 or 2013. She had mentioned what a cool guy he was, and told me to check out his booth at Coast City Comicon while we were there. Well, at the time, I was dressed up like Obi-Wan Kenobi from Star Wars: Episode III, but I had to see the man responsible for feeding my Beavis And Butt-Head addiction back when I was in high school, in the form of the comics he drew. I collected most of the issues (and still have many of them, I believe) and it blew my mind to meet the artist, finally, after all these years. I had already spent all my money that day so I couldn’t buy anything from him then, but he mentioned he would be back again. So, I made small talk and then found him at a couple more conventions later on and then we eventually became Facebook friends.

Rick is someone who directly engages you. When I spoke with him recently at the Casablanca Comics Comic Expo here in Portland, he saw me walking around multiple times and waved. Each time I stopped at his table to say hello, he was engaged with a group of young people or older fans like myself. He interacts with them, rather than shoving merchandise into their faces like some artists/vendors. He’s full of advice (good advice), and he even tried to connect me with an aspiring artist who was at his table so that we might get together and create a comic book I had on the back burner. He’s always trying to prop people up, make them see their potential, and that’s a good force to have in anyone’s life.

This is why I’m thrilled to be friends with a guy like Rick. Not because he’s funny, or helpful, or cool – he’s genuine. The other stuff is a bonus. Being genuine is a rare trait in people, unfortunately.

One of my favorite memories of Rick happened recently. We had been talking off and on about various things online, and it came up that Dorothy (my girlfriend) was a steampunk owl-person for Halloween. Rick mentioned he had some glassware from the early 1960’s that had been untouched, which belonged to his family – and which also happened to have owls on them. He asked if I might be interested, and in a sort of mentor-style, offered to trade me the glasses for a piece of artwork. I agreed, and he took time out of his day of taking one of his sons job hunting in Portland to come into my store and deliver the glasses. While they sat in the cafe of my store, I asked my shift manager if I could take my ten-minute break early and I walked out to say hi. We made small talk, I met his son, and Rick explained about the glasses. I had a busy holiday season so I haven’t finished the drawing yet that I agreed to do, but I will. Rick didn’t have to do any of that. Didn’t have to take time out to drop by, didn’t have to make the trade with me. But he’s that kind of stand-up guy.

And now, I leave you with some photos relevant to my time with Rick thus far: 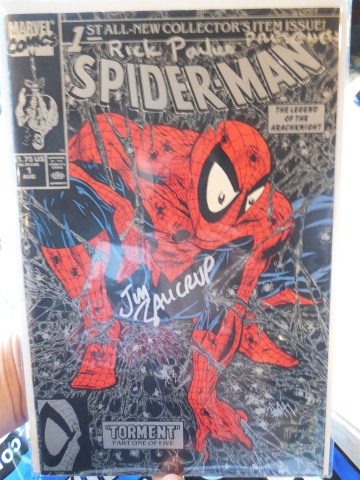 A signed copy of Spider-Man #1 from Rick. He drew pupils in Spidey’s eyes. (Also signed by Jim Salicrup, a former Marvel Editor, who was there with Rick that day) 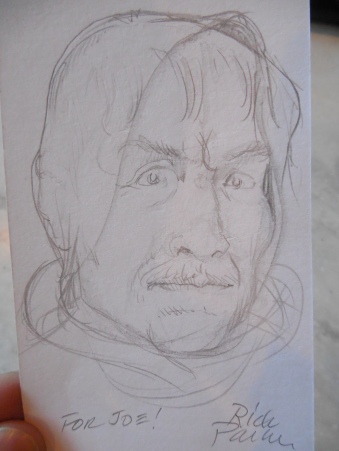 A rough sketch Rick did for me of Old Obi-Wan. 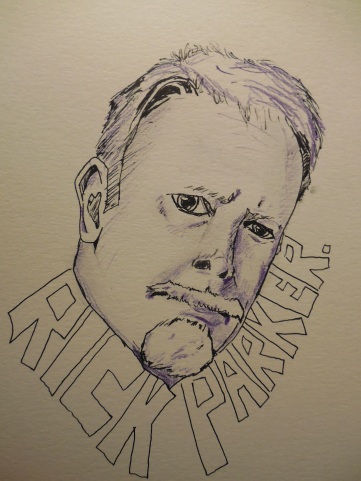 A quick drawing I did of Rick, which I still have to give to him. 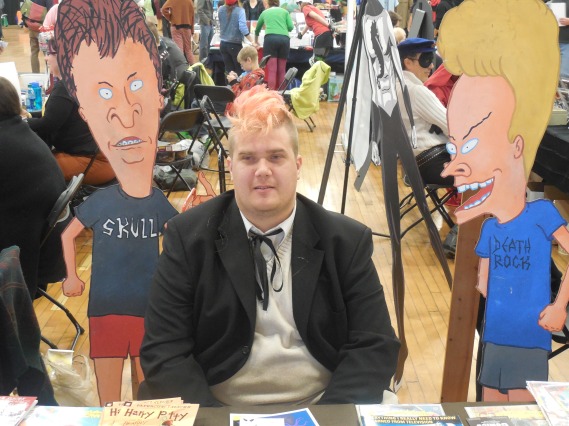 Rick’s table at the Portland Comic Expo being watched by Richard Hale. Note Beavis and Butt-Head in the background.